Art by Matthew Baumgardner on display in Duke Library

An event every week that begins at 8:00 am on Thursday, repeating indefinitely 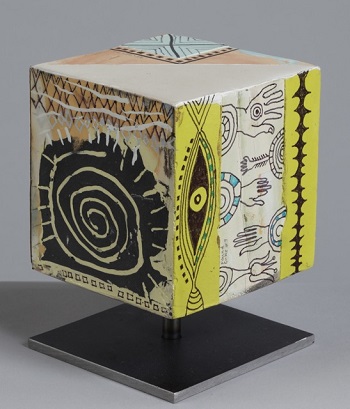 Sculptor and painter Matthew Clay Baumgardner of Travelers Rest, South Carolina, passed away last year, but his art stands as a memorial to his work as it goes on display in the James B. Duke Library through March 2020.

The exhibition, “Matthew Baumgardner Cubes,” features dozens of his cube works, paintings and other artifacts that reflect his process and provide an introduction to his career. Presented by the Furman Department of Art and Special Collections and Archives, the exhibition was organized by students enrolled in ART 281: Curatorial Issues and Practice, a course taught by Furman art historian Sarah Archino.

Archino says the estate of Baumgardner approached the art department due to the mutual respect between retired Furman art professor Michael Brodeur and Baumgardner. “I think [the estate] was looking for an institution with students that could undertake the type of research and writing that was necessary for the project,” she adds.

Born in Ohio in 1955, Baumgardner launched his professional career in the 1970s, while studying under South Carolina artists Carl Blair, Emery Bopp and Darell Koons. In 1982, he earned his MFA in painting from the University of North Carolina at Chapel Hill. In 1983, he moved to New York City, where most of his work was created. During that time, he had a family and watched his career climb to new heights.

Baumgardner was awarded a national Visual Arts Fellowship in Painting by the National Endowment for the Arts in 1993 for his birch plywood series, which employed his signature technique of embedded glyphs in multiple layers of pigmented gypsum.

Baumgardner relocated in 2006 to Travelers Rest where he designed and built a home/work studio on an acre of land, and worked until his death in November 2018.

“Matt’s work looks effortless, but it came at a high personal price,” says Brodeur, who admires Baumgardner’s work. “It’s lushness and ravishing beauty belie the struggle and pain that often reside within the creative artist.”

Said to be “deeply spiritual,” according to his survivors, Baumgardner once described his art this way: “My work imparts a transformative experience that resonates with my longings to channel universal and spiritual planes; I want to transport the spirit, to remind us all that we are perfect beings passing through a transient world. My soul craves expression through poetic and timeless art that beckons the viewer to return time and again to find renewal and fresh experiences.”

The Special Collections and Archives gallery is located on the second floor of the Duke Library, and is open Monday through Friday, 8 a.m. to 5 p.m., or by appointment.

Baumgardner’s work will also be featured in the main display cases in the Roe Art Building, forming an auxiliary exhibition. The Roe Art Building is open to the public 9 a.m.-5 p.m., Monday through Friday. For more information, contact [email protected].