Conversations with a Curator: Fossils, Phosphate and Freedmen 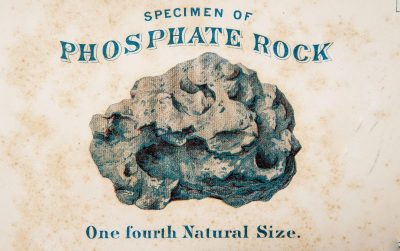 Mining and agriculture are intertwined in the history of the Lowcountry. In particular, the mining of phosphate for use in fertilizers for crops resulted in an economic mining boom in Charleston at the end of the Civil War. At the close of the war, the economy collapsed in much of the South due to the devastation that the war brought and the emancipation of enslaved people, who no longer provided plantation owners a free labor source. Phosphate mining brought an infusion of growth from a previously untapped resource.

Due to the close proximity of the mines to Charleston’s port, Charleston was one of the largest producers of phosphorus in the world. An industry spurred from scientific exploration and fossil hunting, Charleston’s reign as king of phosphorus production is a unique window into the relationship between post-Civil War society, paleontology, and natural disaster. Dive deeper into the exhibit Fossils, Phosphate, and Freedmen: Charleston’s Post Civil War Mining Boom with Curator of Natural History, Matthew Gibson for this program.

This talk is free for members and free with admission to The Charleston Museum.