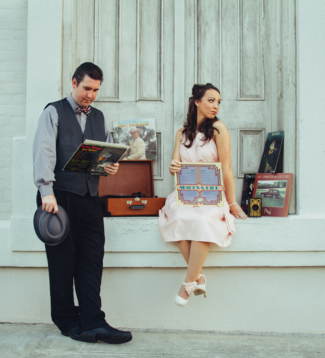 The Fine Arts Center of Kershaw County (FAC) will present Darin & Brooke Aldridge live in the Wood Auditorium on Saturday, September 14 at 7:00 p.m. VIP tickets are on sale now for $35. General Admission seats are $25. The VIP section is limited to 85 people, so get your ticket today!

Husband and wife duo Darin & Brooke Aldridge draw on the traditions of their native North Carolina, the savvy of a young, gifted band and their own dedication to ingenuity to create the most adventurous album of their career with their latest critically acclaimed release, Faster & Farther.

The duo has placed several tracks at the top of the charts on Americana/Roots, SiriusXM, Bluegrass and Gospel charts. They have received multiple nominations from the International Bluegrass Music Association (IBMA) the Society for the Preservation of Bluegrass Music of America (SPGBMA) and Inspirational Country Music (ICM). Their music videos “Wildflower” and “Tennessee Flat Top Box” and most recently “Every Time You Leave” were heavily featured on outlets including CMT, CMT Edge, GAC, Bluegrass Ridge TV and The Bluegrass Situation. TV appearances include PBS, Great American Gospel, The Bluegrass Road, RFD-TV, Blue Highways TV, Songs of the Mountain, Woodsongs, Larry’s Country Diner and Music City Roots.

Both highly acclaimed vocalists in their own right (Brooke is the reigning IBMA Female Vocalist of the Year and nominated again this year), Darin and Brooke combine rich harmonies with impeccable musicianship to create the unmistakable sound that has made them one of the hottest young acts in acoustic music and they’ve surrounded themselves with a band of equally amazing pickers. Darin spent 6 years as a member of the acclaimed County Gentleman and is a highly sought-after multi-instrumentalist. Brooke has been lauded for having one of the most powerful voices in music of any genre.