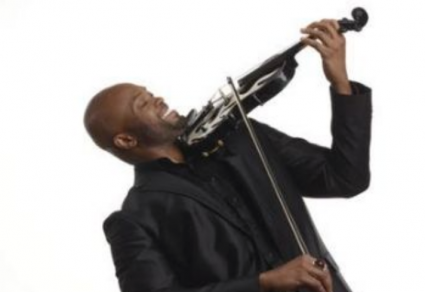 Atlanta’s Contemporary Jazz star Ken Ford has collaborated with Bruno Mars, Chaka Khan, Ce Lo Green, and Lalah Hathaway – just to name a few artists. He has performed everywhere from the Mallorca Jazz Festival in Spain to right at home at Atlanta’s City Winery. He is excited to be bringing his violin and full band to the Newberry Opera House Friday, February 28, 2020 at 8:00 P.M.

Long before Ken Ford was the “King of Strings,” he was required to choose an instrument to play in the fourth grade. He remembers, “When I first starting playing in Elementary school – you are taught the basics and you are taught a classical foundation and that carries on…but when I got to high school we had some teachers who got together and formed an extracurricular orchestra. They arranged music like Michael Jackson & Barry White. This was music I knew. Remember my Dad was a DJ.”

Ken and his daughter would later both become DJs. “My daughter surprised me for my 50th birthday. She came out with her controller- we used to call them turn tables – and rocked the crowd. I was so proud.”

This love of modern R&B, Hip-Hop, and Soul; layered with Ken’s classical training, gave him his Contemporary Jazz sound that has him playing for the Super Bowl, Michelle Obama, and around the world.

In 2017, Ken released his fifth album “Eleven.” He calls this album the first time he had total creative control. “I wanted to play something challenging. One of my partners wrote a song for me. He is a fusion key board player. I told him, ‘Don’t hold back.’ And, he didn’t”

Ken Ford will bring his full band when he comes to Newberry on February 28. When asked what to expect of the performance, he said, “Energy, energy, energy – right from the beginning to the end. I will have you enjoying yourself. Laughing, crying, clapping and dancing, I will run up and down and come out into the audience and just have a good time.”