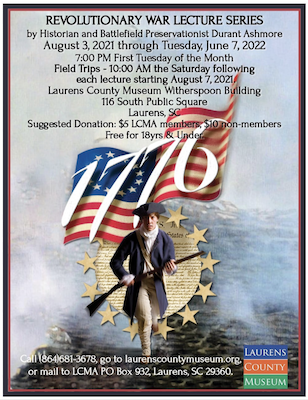 The Revolutionary War in the SC Backcountry by Durant Ashmore
“Shots Fired in the Backcountry” is the next in a series of lectures hosted by the Laurens County Museum. This lecture will take place on September 7th at 7:00 pm. at the Laurens County Museum, Witherspoon Building on the square in Laurens.
The first armed conflict in the Revolutionary War south of Lexington and Concord occurs in the South Carolina Backcountry. The discussion will focus on the First Siege of Ninety Six, the Battle of the Great Canebrake, and the Snow Campaign (September, 1775-December, 1775).
On September 11th at 10:00 am there will be a field trip to the Battle of the Great Canebrake (December 22, 1775). Historic Hopkins Farm, 3717 Fork Shoals Road, Simpsonville, SC. This is the only pitched battle ever fought in Greenville County.
This is the third lecture in the year-long monthly series presented by historian and battlefield preservationist Durant Ashmore at the Laurens County Museum.
These lectures will be given on the first Tuesday of the month at 7:00 pm at the Laurens County Museum, 116 S. Public Square, Laurens, SC.
Laurens County Museum suggests a donation for each lecture of $5 LCMA members, $10 non-members, and 18 years and younger free.