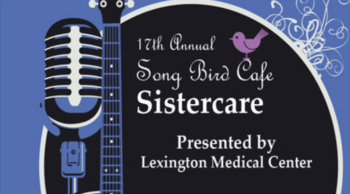 Sistercare is hosting a special evening at the UofSC Pastides Alumni Center October 10th with Grammy Award winning singers and songwriters, Southern Way Catering’s finest culinary creations, Bar by Black Tie Affair, and Valet courtesy of Southern Valet. The reception is being held from 6:30pm to 8:00pm, and the show begins at 8:00pm.

Our singer/songwriters include Kristian Bush, Wyatt Durrette, James Otto, and Levi Lowrey. Kristian Bush is a Grammy Award-winning singer, songwriter, producer and multi-instrumentalist; surpassing sales of over 22 million albums worldwide, achieving five No. 1 singles and winning numerous awards, including trophies from the Grammys, AMAs, ACM Awards, CMT Music Awards and CMA Awards. Kristian founded Sugarland in 2002. Wyatt Durrette performed with the Zac Brown Band and is the co-writer of many of Zac Brown Band’s singles, including their breakthrough “Chicken Fried”. Wyatt’s collaboration resulted in forty total song collaborations which led to twenty-two million singles sold, eight million albums sold, and twelve #1 hits. James Otto’s hit, “Just Got Started Lovin’ You,” topped the country chart and was the Most Played Country Single of the Year in 2008. He co-wrote the Jamey Johnson hit “In Color,” which was nominated for a Grammy and won both the Country Music Academy’s “Song of the Year” and the Academy of Country Music’s “Song of the Year” awards in 2008. Levi Lowrey has performed extensively as a solo artist and headliner. Lowrey is one of the co-writers of the ‘Colder Weather’ performed by Zac Brown Band that went #1 for two weeks and co-wrote ‘The Wind” from their #1 Billboard album Uncaged. He was a CMA nominee for “Colder Weather” and 2012 BMI Country Award Winner.

Advanced reservations are required and can be made at www.sistercare.org/events or by calling 803-926-0505.