An event every week that begins at 8:00 pm on Thursday, Friday and Saturday, repeating until June 1, 2019 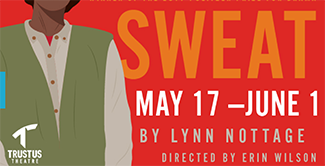 Trustus Theatre brings its second Pulitzer Prize-winning play, Sweat by Lynn Nottage, to its stage this season. Sweat, the second most produced play in the United States this season, brings to light the harsh realities of what it’s like to survive on minimum wage in one of the poorest cities in the country and the dissolution of the American dream. This play speaks to Columbia’s history—once a regional textile manufacturing center with six mills in operation and 3,400 millworkers—and to how easily the American dream can be lost when the country’s economy struggles. Sweat will open on the Trustus Theatre Main Stage on Friday, May 17 and will run through Saturday, June 1, 2019. It is directed by guest artist Erin Wilson—a Core Ensemble Member of PURE Theatre in Charleston, SC. Tickets may be purchased at www.trustus.org or by calling the Trustus Box Office at 803-254-9732.

Sweat will run from Friday, May 17 through to Saturday, June 1, 2019 and tickets are on sale now. Tickets can be purchased by calling the Trustus Theatre Box Office at 803-254-9732 or online at trustus.org. Opening night is Friday, May 17, at 8pm.

Trustus Theatre believes that ticket prices shouldn’t keep theatre-lovers from being able to experience great professional theatre. This is why they offer one I.P.W.I.C. (I Pay What I Can) matinee on the first Sunday of each non-musical run. For Sweat, the I.P.W.I.C. matinee is Sunday, May 19, 2019 at 3pm. Based on availability, tickets can be purchased for a donation of $1 and they are available on a first come first served basis one hour prior to curtain at the box office window. Patrons wishing to guarantee seats are still able to reserve preferred seating for these performances at the regular matinee ticket price.