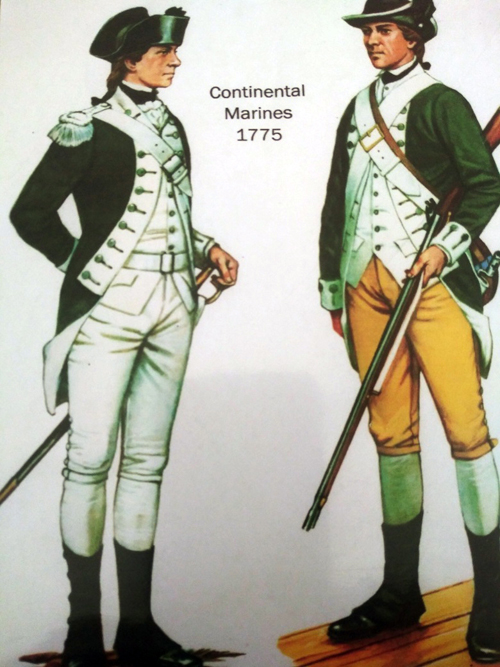 Before the halls of Montezuma, and even before the shores of Tripoli, the United States Marine Corps played a critical role in the formation of this nation from its very beginning.

At noon on Friday, Feb. 28, at the South Carolina Confederate Relic Room and Military Museum in Columbia, retired Marine Ed Forte will tell the story in a free lecture titled, “The Continental Marines, 1775-1783.” The public is invited.

Dressed in a Marine uniform appropriate to the period, Lt. Col. Forte will tell how the Marines were formed early in the American Revolution, and the indispensable role they played in defeating the British and achieving independence for the new nation.

As every Marine can tell you – since the Marine Birthday is a major event every year in the Corps – the Marines got their start on 10 November 1775, when the Second Continental Congress established the Continental Marines with a decree that two battalions be raised and that no man be “enlisted into said battalions, but such as are good seamen, or so acquainted with maritime affairs as to be able to serve for and during the present war with Great Britain and the Colonies.”

That means the Marines officially existed eight months before the Declaration of Independence was signed – making the Corps older than the nation itself.

Tradition has it that the first men signed up at Tun Tavern in Philadelphia, where the first Boot Camp was established.

The Marines’ role was patterned on that of Britain’s Royal Marines. They served on board Navy ships where they functioned as boarders, participated in cutting-out expeditions, fired on the enemy from the tops, served on gun crews and helped keep “good order and discipline” among the sailors in the crew. (In the Royal Navy, that meant preventing mutinies and guarding the rum supply.)

One fascinating feature of the time was that the Continental Marines were not the only marines serving the Patriot cause in that war. The individual states had their own navies, and their own marines. Thanks to its tobacco wealth, Virginia had the largest navy of all.

And as Forte will tell, they all played a important role in a number of significant battles.

Edwart T. Forte, originally from New Jersey and now a resident of Mt. Pleasant, graduated from Fairleigh Dickinson University, and earned his master’s degree in American History from Villanova University. He was commissioned an officer in the United States Marine Corps via the Platoon Leaders Class Program, and served on active duty for the next 23 years. He served in a variety of worldwide command and staff positions at the tank platoon, company and tank battalion levels.

After retiring as a lieutenant colonel, he taught history and served as a high school principal in Georgia. He is an active reenactment member of both the New Jersey Light Infantry Company and the 2nd S.C. Continental Line units, and has appeared in several time-period documentaries.