We Are Proud to Present […] 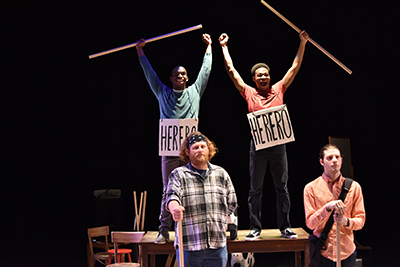 In preparation for presenting the 2019 Pulitzer Winner Fairview, Trustus Theatre is partnering with Coker College to revive their stirring production of We Are Proud to Present a Presentation About the Hero of Namibia, Formerly Known as South West Africa, From the German Südwestafrika, Between the Years 1884-1915—an earlier work by Fairview playwright Jackie Sibblies Drury. This limited run production will be presented by Coker College and will be on Trustus Theatre’s Side Door Theatre stage January 16-18, 2020. Tickets may be purchased at www.trustus.org, or by calling the Trustus Theatre Box Office at 803-254-9732.

A group of actors gather to tell the little-known story of the first genocide of the 20th century. We Are Proud to Present […] takes place largely in a rehearsal room that descends from collaborative to absurd as a group of idealistic actors attempt to recreate the extinction of the Herero tribe at the hands of their German colonizers. Along the way, they test the limits of empathy as their own stories, subjectivities, assumptions, and prejudices catalyze their theatrical process. Eventually the full force of a horrific past crashes into the good intentions of the present, and what seemed a faraway place and time comes all too close to home.

We Are Proud to Present […], written by Jackie Sibblies Drury, will be directed by Coker College’s Assistant Professor of Theatre, Andrew Schwartz. The play will be presented by Coker College and will include five actors making their debut at Trustus Theatre: Kamian McClain, Matt Hicks, Isaiah Washington, Amber Coulter, and Chevez Smith. Tristan Pack returns to the Side Door after appearing in the critically acclaimed production of HIR in Season 33. All six are current Coker College students who are either majoring or minoring in theatre and have performed the play before at Coker College.

Trustus Theatre Artistic Director, Chad Henderson, is excited to collaborate with Coker College to bring this production to the Side Door Theatre this January.

“Jackie Sibblies Drury is one of America’s most important contemporary playwrights,” said Henderson. “Her Pulitzer Prize winning play, Fairview, is coming to Trustus Theatre’s main stage in April. We wanted to offer Columbia audiences a primer of her thoughtful, poignant, and inventive work. Hosting Coker College’s revival production of We Are Proud to Present […] is a great opportunity for Trustus to introduce Drury’s cannon to Columbia, and to introduce audiences to an excellent troupe of young performers.”