First came the cars. Then the summer vacation stormed America in the late 1940s, becoming an institution. And it did something else. It fired up the imagination of people stuck on the road to “there.” Dreamers created roadside attractions to snare the coins rolling down the road. Change, however, truly is inevitable. These oddities lost their luster. All these years later, all across the United States, in the middle of nowhere, you’ll come across spectacles that gave America’s highways character, a rest stop kids refused to let their parents pass. That was then; this is now. Super theme parks dominate and interstates spirit restless nomads through a franchise-cursed land.

Time caught up with America’s roadside attractions. Visit these relics of the road today and you can hear rust crackling. Cars keep rolling by and money for maintenance rides with them. Roadside attractions, welcome to the end of the road. The Era of Abandonment has arrived.

Some attractions were great. Marineland on Florida’s A1A comes to mind, as does the St. Augustine Alligator Farm. As the old war stories would begin, “I was there.”

Others, odd ones, I only heard about. Among them, the world’s largest catsup bottle in Collinsville, Illinois, the world’s largest ball of twine in Cawker City, Kansas, and the Cadillac Ranch in Amarillo, Texas. Many claimed superlative status: the tallest or largest. Close by we have what may be the tallest Mexican in the world, Pedro, at South of the Border near Dillon. I cannot pass it without a strange mix of wonderment and aversion. Nor can I forget the one time I climbed the Sombrero Tower … a lifetime ago.

January 30 I drove to Apex, North Carolina. My Atlanta daughter, Becky, and her two children were with me to visit my daughter, Beth, and her family. Becky and her kids had left Atlanta earlier at 7:00 a.m. By 3:00 p.m., the children had been in a car for seven hours, save for lunch. To say they were restless is an understatement. As soon as we left I-20 for I-95 tacky billboards appeared. The billboards hyped a pseudo-Mexican character, “Pedro.” Fluorescent orange, green, red, and yellow text, suggestive of the tropics, covered the billboards. It made for a garish sight and the campy word play added a corn pone element.

One billboard held a huge link sausage. “You never sausage a place. (You’re always a wiener at Pedro’s.)” Another proclaimed “Smash Hit” and attached to it was a wrecked car. A real car! Yet another featured an upside down Pedro with the words “Too Much Tequila!” The billboards count down the miles to a place that evolved to capitalize on the famed vacation movement and the northern exodus to Florida. All were the brainchild of the late Alan Schafer, a journalism major at the University of South Carolina who left school to take over his ailing father’s café and beer distribution company. “He did good,” as we say down South. At its peak it’s claimed that three million people a year pulled into South of the Border.

“Y’all want to climb the tower?” I asked. I don’t have to tell you the answer. It hit me that this scene had repeated itself thousands upon thousands of times.

As I exited I-95, I realized I was driving back into the 1950s. We pulled into what many have long argued is a place that promotes a racist caricature of a Mexican bandito. Pancho Villa comes to mind. I can’t speak for you but let me say this: “So damn what. Lighten up.” 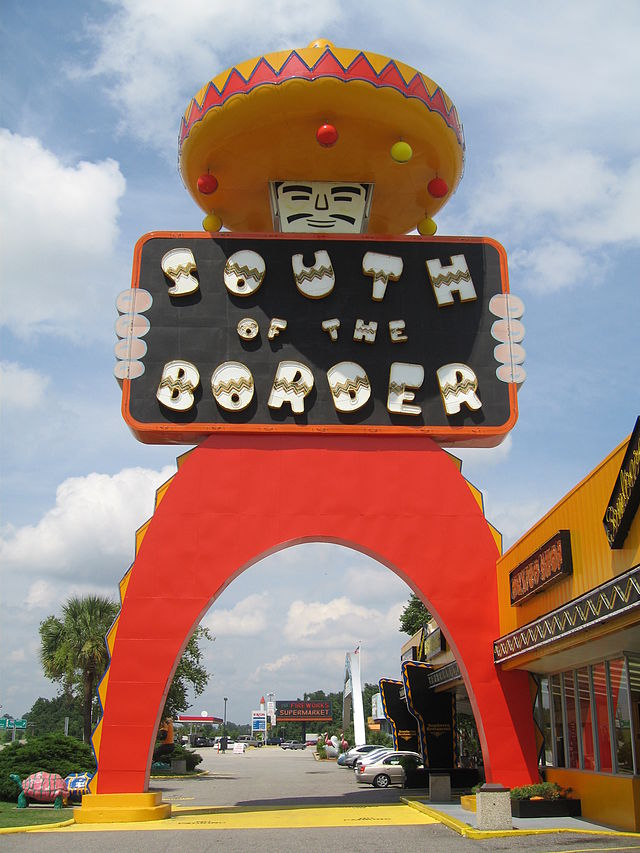 We parked and found ourselves in a ghost town. We went into the building over which the Sombrero Tower reaches skyward and I asked the attendant if we could climb the tower.

“It’s closed,” she said. “Probably always will be.”

All I could surmise was that funds for maintaining the tower had dried up. Disappointment set in. I had taken my daughters up the tower in the 1980s when they were children and I wanted to repeat this odd bit of family history. Plus it would have done the kids good to burn some energy. After throwing some money in one of those “grab a stuffed toy with a claw” games, we went outside.

I looked around the parking lot. I saw one other car. A diet of sorts had set in. In 1999 Robert Clark and I featured the big marquee, a mustachioed Mexican holding a South of the Border sign in Reflections of South Carolina. Looking at that photograph just now I counted ten cars in the spot where we had parked. A tourist stop designed to feast on the age of the automobile, South of the Border sits on Highway 301 just yards below the North Carolina border, hence “South of the Border.” This tourist trap like no other evolved from a shocking pink roadside beer stand, established in 1949. Robeson County, just across the line in North Carolina, had been a dry county at that time. South of the Border, dare I use the acronym “SOB,” flourished in its glory days. It grew to over a square mile in size and had its own fire and police departments. Today, it gets passed. Wasn’t always that way though.

Around these parts scuttlebutt holds that political connections made sure I-95 would run right by South of the Border. Business, for certain, would boom with all the snowbirds flying back and forth between Florida and the Northeast. There’s plenty of speculation but truth can be slippery, especially when it involves complexities: North Carolina’s determination of where I-95’s southern terminus would be, Dillon’s residents’ concern as to where the rumored “superhighway” would come through, SC Highway Department changes to its interstate plans in the area, and an extraordinary friendship among power brokers Bubba Ness, Alan Schafer, and SC State Senator Jack Lindsey.

In “Building Bigger: South of the Border and I-95,” Laura Koser wrote, “South Carolina historian Walter Edgar has been widely quoted giving his opinion, that Schafer ‘had the political influence to get I-95,’ pointing out that the Interstate ‘…makes a little jag there to go through South of the Border.’” Julius “Bubba” Ness, whose power would get him elected Chief Justice of South Carolina, would do anything for Alan Schafer, according to a reliable source. Nothing came of all this, however, but it made for intriguing speculation with a reference to a murder even. All the key players are long dead.

Today South of the Border is the first thing southbound Northerners see of South Carolina. Think about that. Their first impression of the Palmetto State, known for Charleston, mountains, and its haunted lowcountry, is that of a campy Mexican village that’s as authentic as those sugar-water-filled red and yellow plastic flowers hummingbirds love. Colorful, gaudy even, but nowhere near the real deal. That hasn’t stopped the place from getting all sorts of publicity though.

Roadside America nails that South of the Border ambience. “The automobile trip from the bleak cities of the Northeast to the sunny shores of Florida via I-95 takes two good days of driving. Halfway there, as you speed between endless miles of pine forest, visible heat rising up off the road, a huge alien sombrero nearly 200 feet high [165] suddenly appears in the distance. Have heat, fatigue and eight ceaseless hours of auto bingo and children’s’ hands grabbing at your sunglasses shredded your senses like old retreads on hot asphalt?

You grin, speed up, and quickly turn off at the next exit, as if compelled by some otherworldly force. The sombrero is, in fact, Sombrero Tower, landmark of the South Of The Border tourist complex. After enduring an accelerating onslaught of 120 billboards for more than 200 miles, this is what you’ve waited to see.

South Of The Border (or SOB, as it’s known to insiders) is a unique amalgam of Dixie and Old Mexico. At first you wonder what all this Mexican stuff is doing in South Carolina, thousands of miles from its natural habitat. But in a remarkably short time you’ll accept SOB as a neon yellow and pink Tijuana, with the added benefit that its inhabitants speak English and its water is safe to drink.”

Now, what about that racist caricature thing? According to South of the Border’s website, “How did Pedro come about? Well, Mr. Schafer went to Mexico to establish import connections and met two young men. He helped them get admitted to the United States, and they went to work at the motel office as bellboys for several years. People started calling them Pedro and Pancho, and eventually just Pedro.” Schafer heard the racism comments and dismissed them saying his Pedro was a light-hearted joke. Today all employees are referred to as “Pedro,” regardless of their race or creed, an effort to dilute claims of racism.

Despite being put off by the Mexican kitsch, I like the place and am glad the politically correct crowd has yet to make this place a target. Maybe they realize it will become a relic of the Great Automobile Age, a ghost town from Cormac McCarthy’s The Road or Mel Gibson’s Road Warrior. Perhaps the social media crowd, our modern-day lynch mob, will crucify this Mexican mockery. Sarcasm deliberate, for kids and their innocent minds love the place no matter what. Life’s toxins have yet to infect them. When my grandkids saw the place they thought they had landed in Disney World. The excitement died though as they looked around and saw no crowds, no parades, no Magic Kingdom, not even a Mariachi band. Back outside, a cold wind whistled through the big tower’s steel supports and we all drifted toward the public restroom. We left, never to return.

Three days later on the trip back the kids didn’t care that we passed the place. They were too busy playing with their electronic tablets, no doubt another reason America’s roadside attractions rust away.

A few notable things about this tourist trap. Former Federal Reserve Chairman Ben Bernanke of nearby Dillon worked at South of the Border throughout college as a waiter. He wore a poncho and waited tables to pay his way through Harvard. Hollywood found the place too. Part of the film, Forces of Nature was filmed here. Bart Simpson parodied the place in “Bart vs. Australia.”

Movies and TV aside, what do people really think of when you mention South of the Border? Schafer’s billboards (Be a Deer! Bring some Doe) and that Sombrero Tower. The one we didn’t get to climb in this time-trapped tourist trap, this one-time oasis that sprang from beer, fireworks, reptiles, and more.

Tom Poland is the author of eleven books and more than 1,000 magazine features. A Southern writer, his work has appeared in magazines throughout the South. The University of South Carolina Press has released his and Robert Clark’s book, Reflections Of South Carolina, Vol. II. The History Press of Charleston just released his book, Classic Carolina Road Trips From Columbia. He writes a weekly column for newspapers in Georgia and South Carolina about the South, its people, traditions, lifestyle, and changing culture.