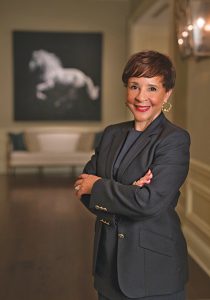 The annual tribute’s theme will be “The Power is in YOU. Advance the Dream!”

The MLK Ecumenical Service will be held at 4:00 p.m. on Sunday, January 19. In honor of the new decade, YWCA Greater Charleston will begin rotating this annual service to different houses of worship across the tri-county region in order to reach more Lowcountry residents. This year the service will be held at Mount Moriah Missionary Baptist Church in North Charleston, where Bishop McKenzie will deliver the keynote address to more than 1,000 expected attendees.
The service is free and open to the public.

She formerly served as the presiding bishop of the 13th Episcopal District in Tennessee and Kentucky and the 18th Episcopal District in southern Africa. She was appointed to serve on the Advisory Council of the White House Faith-Based and Neighborhood Partnerships by President Barack Obama In 2009, and has been named by the Huffington Post as one of the 50 Most Powerful Women Religious Leaders, honored as one of the Great African American Female Preaches, and featured by Ebony magazine.

The MLK Business and Professional Breakfast will cap the 10-day tribute. Held at 7:30 a.m. on Tuesday, January 21 at the Charleston Gaillard Center, the event will feature Johnson as keynote speaker and City of Charleston Mayor John Tecklenburg as honorary chairman.

Johnson, an entrepreneur and philanthropist, is the founder and CEO of Salamander Hotels & Resorts, co-founder of the Black Entertainment Television (BET) network, producer of the critically acclaimed film “The Butler,” and the first African American woman to achieve a billion-dollar net worth. She is the only black woman to own stakes in three professional sports teams, spanning the NHL, NBA, and WBNA.

Johnson has long been a powerful force in the entertainment industry. In addition to her work as founding partner of BET and producer of The Butler, she has served as executive producer of acclaimed documentaries “Kicking It,” “A Powerful Noise,” “She Is the Matador,” and “The Other City,” and is the founder and chair of the Middleburg Film Festival, an annual celebration of independent film that has attracted sold-out crowds from its first year.

She is also the co-founder of WE Capital, a venture capital consortium to support and empower female-led enterprises that can advance transformational social change, and serves on the boards of the International African American Museum in Charleston, the Jackie Robinson Foundation, and Parsons: The School for Design in New York. Previously she also served on the Leadership Council at Harvard Kennedy School’s Center for Public Leadership and as global ambassador for CARE, a leading humanitarian organization combatting global poverty by empowering women.

The breakfast is expected to be attended by hundreds of Charleston’s business, civic, and clergy leaders; at the 2019 event, nearly 700 ticket-holders packed a large ballroom and overflow space at the Charleston Gaillard Center.

Organizations can sign up now to sponsor the 2020 MLK Celebration online at ywcagc.org/mlk or by emailing [email protected]. MLK Breakfast tickets are available now for $65 per person at www.ywcagc.org/breakfast.

The 48th Annual Reverend Dr. Martin Luther King, Jr. Celebration is one of Charleston’s longest running events, predating Spoleto Festival USA and other well-known local events. The annual celebration was founded by YWCA Greater Charleston and first held in January 1972—one of the first such tributes to Dr. King in the nation. The MLK Business and Professional Breakfast was added in January 2000 in partnership with former Charleston Mayor Joseph P. Riley, Jr. and the City of Charleston. Today the celebration is the largest tribute to Dr. King in South Carolina, attracting thousands of celebrants each year.

For 112 years, YWCA Greater Charleston has worked to eliminate racism and empower women in Charleston, Berkeley, and Dorchester Counties. A historic local association of YWCA USA, one of the oldest and largest multicultural women’s organizations in America, it seeks to create opportunities for personal growth, leadership, and economic development of women, girls, and people of color. Its annual 10-day Reverend Dr. Martin Luther King, Jr. Celebration is one of Charleston’s longest running events. In 2016 it brought the first Girls Who Code club for middle school girls to Charleston; its subsequent Y Girls Code program has since expanded to female students of all ages. In 2017, it brought the Racial Equity Institute, an ongoing program, to Charleston to help local leaders understand and address racism in the community. And in 2018, it introduced What Women Bring, an annual power lunch attended by hundreds to celebrate and empower South Carolina’s women in business, community, and culture. For more information, visit ywcagc.org.