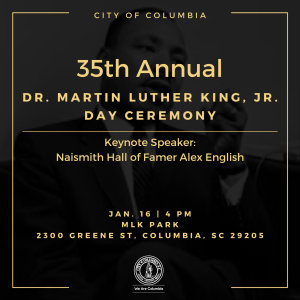 NBA Hall of Famer Alex English to be Keynote Speaker

After graduating from Carolina in 1976 Alex was drafted by the Milwaukee Bucks in 1976 and spent two years with the club, eventually becoming their all-time leading scorer. During his illustrious 15-year NBA career, he also had stints with the Indiana Pacers (1978-80), and the Dallas Mavericks (1990-91), but spent most of his career with the Denver Nuggets (1981-1991) becoming their all-time leading scorer. During that period he also served as a player representative, Vice President and President of the NBA Players Association.

English’s success extends well beyond the court. After retiring from his playing career, he was appointed Director of Player Programs for the National Basketball Players Association (NBPA). While serving in this capacity he successfully revised and managed several league-wide player programs and served as liaison between the NBPA and the Retired Players Association. During the 1995 NBA/NBPA labor negotiations, Alex was appointed interim Executive Director of the NBPA. Alex was introduced into the Naismith Hall of Fame in 1997, his first year of eligibility.

Alex English left the NBPA to pursue his personal interest in sports marketing. In 1996 he co-founded Flick2 Ltd, a sports marketing company that represented current and retired professional basketball players for contract negotiation and marketing and also coordinated sports events. He also served as Chairman of the Board and Vice President of Hooplife.com, a web-based basketball information service. In addition to his work in the sports industry, Alex is also an accomplished author and poet and starred in the major motion picture, Amazing Grace and Chuck. During the 1997-98 NBA season Alex could be seen on FOX Sports Network and FOX Rocky Mountain as the color commentator for the Denver Nuggets. He has served as co-host of This Week in the NBA, which airs on CNNSI. Most recently he has worked as a basketball analyst for NBA.com TV.