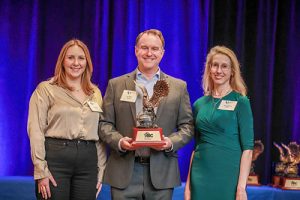 Carolinas-based A M King, a leading integrated Design-Build firm with an established presence in the Upstate, was honored with a 2022 “Best in Class” Eagle Award in this year’s Excellence in Construction (EIC) Awards competition sponsored by Associated Builders and Contractors of the Carolinas (ABC Carolinas). A M King was singled out with ABC’s highest award in the Industrial category for its exemplary project delivery of what is now North America’s largest avocado plant, located in Laredo, TX. The project’s owner is Mission Produce Inc., the world leader in sourcing, ripening, processing, and distributing fresh Hass avocados.

This prestigious award from ABC Carolinas is the third recognition award presented to A M King for its Mission Produce project. Earlier this year, A M King won the Design-Build Institute of America (DBIA) Southeast Region’s 2022 Best Project Award and recently earned National Finalist status in the 2022 “Built by the Best” Awards program sponsored by the Controlled Environment Building Association (CEBA).

For Mission Produce, A M King provided property consulting services in addition to designing and building the firm’s new 274,000-square-foot facility, which includes cold storage, ripening, processing, and packaging space. The facility is located in Laredo’s Pinnacle Industry Center on 33 acres adjacent to the Rio Grande River and the U.S.-Mexico border. The strategically located facility allows Mission Produce to capitalize on the continued popularity of its signature product in the nation’s busiest land port.

“Mission Produce had a clear vision for developing their North American flagship facility in Laredo. They wanted to build the largest and most innovative facility of its type, strategically positioned to expedite imported fruit from Mexico — one that would process more avocados than any other facility in North America and provide greater flexibility and expanded capabilities for their growing customer base,” explained Dan Crist, A M King Vice President.

Mission selected A M King for this critical project based on A M King’s expertise, qualifications and reputation in the food industry, combined with the firm’s deep experience and specialization in Design-Build delivery.

“Mission’s leadership wanted to build a relationship with an experienced team that would partner and guide them through the process. I am happy to report that they could not be more pleased with the outcome of this high-profile project, which represents their first time utilizing Design-Build and their first all-new facility in the United States,” added Crist.

Having won at the ABC Carolinas chapter level, A M King is now a contender in ABC’s National EIC Awards competition for which winners will be announced March 2023.

A M King is an integrated Design-Build firm based in Charlotte, NC with offices in Greenville, SC and Chicago, IL. An employee-owned company, A M King consistently and successfully delivers quality projects throughout the United States. With an experienced team committed to protecting clients’ assets, the firm provides property consulting, design, construction, and facility services in key market sectors including food processing, food distribution, industrial manufacturing, and corporate properties.

Mission Produce Inc. is the world’s most advanced avocado network. The company owns and operates state-of-the-art avocado packing facilities in multiple growing locations including California, Mexico, Peru and Colombia, and it also sources product from countries such as Chile, New Zealand and Guatemala. In addition, Mission Produce’s global distribution network includes 11 forward distribution centers in North America, China and Europe. Over the past 35 years, Mission Produce has become recognized as the leader in the worldwide avocado business.