There it was. A grave covered in seashells. It’s as close to a burial at sea as an inland dweller will get. My sister, Deb, told me about a small cemetery deep in woods. “You’ve got to see it,” she said. I did and its beauty and strangeness struck me.

Now I’ve seen shells placed upon tombstones. The last shell I saw atop a headstone was James Dickey’s stone in All Saints Episcopal Church Cemetery at Pawleys Island. I’ve seen rocks, coins, and mushrooms even on gravesites. Now one stone or more on a tombstone is not what I saw in my back-road journey with my sister. I saw two graves whose mounds were encased in shells cemented into place. The shells provide a protective cover, and it’s more common than you might believe.

I looked into this custom and learned it was a common practice in the Victorian South. African Americans placed clamshells on graves and a few theories attend this tradition. One thought was that the sea brought them to America and the sea would return them to Africa when they died. You’ll find such graves in white cemeteries too giving rise to the belief that whites took up the tradition as well.

The shells, too, symbolize “crossing over” a body of water like the Styx to the afterlife. Another belief speaks to a practical purpose. The mounds of fresh dirt across African American graves easily washed away when a deluge struck. Well, a perfectly cemented “roof” of clamshells, like shingles on a house, shunted away the water.

How did the shells get to inland reaches hundreds of miles from the sea? Read on for there’s a good story that explains how the shells ended up in cemeteries far from the coast. During the hard, lean times of Reconstruction salt was hard to come by. Thus did some communities form salt-making crews. These salt-seeking parties would make an annual trip to the coast. There they boiled seawater till salt remained and took it back to their communities. They’d do some fishing too and pack their catch in salt. They’d gather up shells too for covering graves. 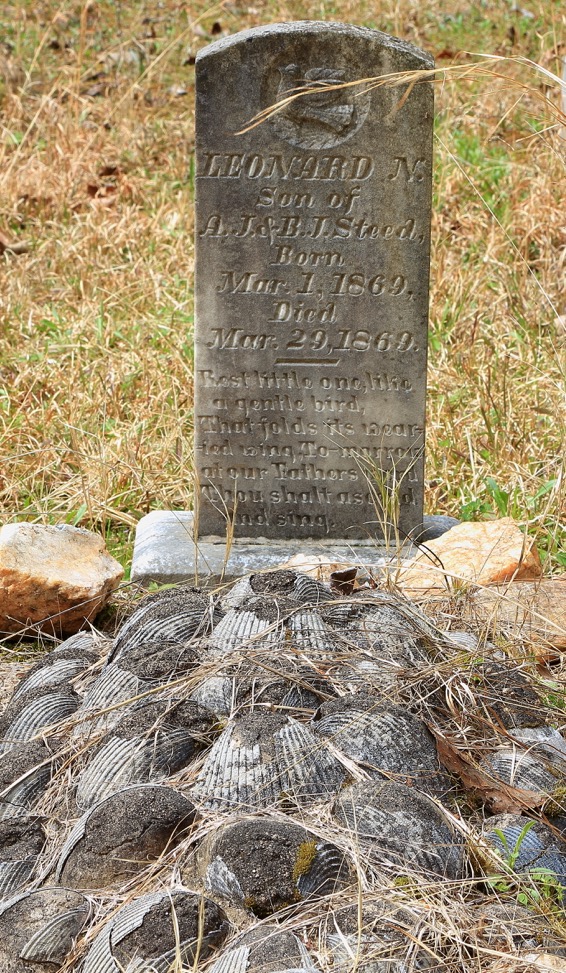 Protection from the elements, a symbol of crossing over as spirits go, and a by-product of gathering salt all came together to give us beautiful graves covered in seashells. I find the shells with their shape and symmetry beautiful, and I wouldn’t mind having them on my grave when my time arrives.

The old ways were beautiful and they didn’t depend on electricity, plastic, or some other artificial product for their existence. In this case black men made a pilgrimage for brilliant white salt and white clamshells. The shells have aged and turned gray but their beauty and significance remain.