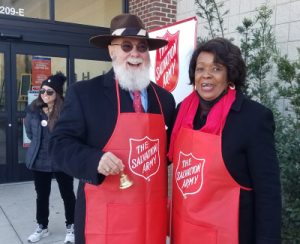 CAMDEN, S.C. – Less than two days after returning from an arduous expedition to Ecuador followed by exploratory work in the famed Galapagos islands, Dr. Tom Mullikin, chair of the S.C. Floodwater Commission, was standing outside of Hobby Lobby in Camden, welcoming shoppers, wishing passers-by a Merry Christmas, and ringing the familiar bell of the Salvation Army.

“There’s something special about wearing this red apron and standing next to this kettle which Salvation Army volunteers like myself have been doing for more than 100 years,” said Mullikin moments before being greeted by an elderly high school teacher. “I love this: seeing old friends, meeting new ones, and all of it part of a tradition that my law firm and annual statewide expedition, SC7, is now part of. We’re doing it for others, and hopefully in some small way setting the example for others.”

Setting the example, indeed: The joint bell-ringing effort between the Mullikin Law Firm and SC7 recruited and filled all nine of its one-hour kettle-manning shifts with everyone from South Carolina Representative Will Wheeler to newly elected Kershaw County Councilman Brant Tomlinson, who by the way is Mullikin’s son-in-law.

Mullikin himself manned his shift alongside his long-time friend and Camden Mayor Alfred Mae Drakeford.

“The Salvation Army was thrilled to partner with the Mullikin Law Firm, SC 7 and local dignitaries for a first holiday season ‘ring the bell’ event in historic Camden,” said Major Mark Craddock, the five-county Area Commander for The Salvation Army of the Midlands. “Their support means everything. Donations to the red kettle provides food, shelter, and bill assistance to local families in need all year long.”

Mullikin said that he hopes this year’s bell-ringing effort will begin for both the Mullikin Law Firm and SC7 a new regular annual tradition.

“The Salvation Army of the Midlands has long been a force for good in central South Carolina,” says Mullikin. “We want to be part of that force, which in many ways parallels not only the work of Mullikin Law, but what we do through SC7 and its founding organization Global Eco Adventures which also helps many underserved Midlands-area communities year-round.”

[Pictured are Dr. Mullikin and Mayor Drakeford. In the background is Maria Ouzounidis of the Mullikin Law Firm who manned the first shift then spent much of her day checking on and spending time with individual shifts from 10:00 a.m. until 7:00 p.m., Monday, Dec. 19.]