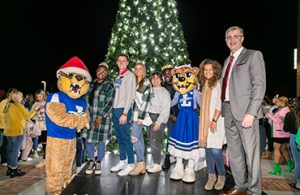 Among the jingle and mingle of Lander University’s Holiday Tree Lighting were smiles, laughter, holiday fun – as well as a chance to share compassion with those who may not have a holiday as festive as others they know.

If one word could describe the holiday extravaganza, it would be “merry.” From nostalgic carriage rides to upbeat Christmas songs and dances, the phrase “something for everyone” was applicable.

Lander students and employees joined alumni and families from throughout the Lakelands to participate in activities as far ranging as an inflatable winter wonderland on the front lawn to ice skating and riding a colorful Ferris wheel. And while there were the opportunities for photos with Santa and Mr. and Ms. Bearcat, guests also became the center of attention in a gigantic snow globe filled with a warm-weather version of snow – a photo-op which prompted more than one snowball fight.

Sisters Isabel and Lily Redfern made their first stop at a holiday station adjacent to Chipley Hall. There, under trees decorated with soft lights, Lander gave guests the opportunity to write letters to members of the U.S. military and also to children in need, including those in hospitals and children’s homes.

Isabel, 7, said she wanted to write a letter because “our Grandpa and our great-Grandpa were in the Navy,” while Lily, 8, said that the family had a loved one who served in the Army.

“We need to honor them,” Lily said.

Nearby, Isabella Erskine, a sophomore from Simpsonville, wrote letters to children and soldiers. “This has reminded me of the Christmases with my family when we donated gifts to families in need,” she said. “It’s the joy from doing that which makes me want to write the letters. I love making people smile, and it’s important to spread love and joy and kindness any time of the year, but especially now.”

A popcorn-stringing contest found students and community members competing in a fast-paced task that required game participants to link popcorn and red balls on a string. The consensus was that the task was harder than it looked. Ana Ortiz, a freshman from Saluda, won first place, with students Caroline Vecchio, of Kershaw, and Keaton Hampton, of Greer, taking second and third places, respectively.

Dr. Richard Cosentino, Lander University president, joined Lander officials and students for the lighting of the holiday tree on the plaza.

The celebration, he said, comes at a time when students are winding down a busy semester of classes and preparing for final exams. “It’s so great to see all of you here tonight. I know how hard you work, but this is your night. Let’s get this party going.”

And party they did. With the lighting of the tree, the plaza became a dance party with members of Lander’s Leputation dance group and the University’s cheer and dance teams entertaining guests.

Teresa and Rick Holland, of Ware Shoals, were in the crowd to cheer on their granddaughter, Kennedi Smith, a national gymnastics champion who is on Lander’s cheer team. “We support her in everything,” Teresa Holland said. “We come to the games at Lander and come to as many events as possible. Kennedi always wanted to come to Lander for college. It has been a great experience for all of us.”

A $30 investment in holiday decorations from the Dollar Tree adorned a cheerful Christmas sweater, designed by art major, Bec Roof. “I made the sweater last year, but added to it this year,” she said of her design, which included Christmas balls, bells, a Rudolph stuffed animal and colorful pompoms, along with pieces of a child’s train track.

Allie, who frequently walks on campus with her “mom,” Bricelin Balcer, of Charleston, was all smiles as students sang in the background. “Honestly, I’m surprised she did so well,” said Balcer, a criminology major and ROTC student who plans a career in military intelligence in the U.S. Army. “She loves attention.”

The decision to pursue a life of service was not difficult for Balcer. “I always knew I wanted to serve,” she said, noting that she participated in a summer boot camp with Lt. Gen. Maria Gervais, a Lander alumna. “She is such an inspiration to all of us.”

Lander estimated that more than 3,000 people attended the Holiday Tree Lighting, the largest event to date. Brian Rhodes, of Greenwood, described the night as “top notch without a doubt.” He and his wife, Holly, said they were impressed with the growth of the Lander campus.

“I love the changes that have been made,” said Holly Rhodes, a Lander alumna from the Class of 2005. “They’ve brought the community into the college. I’m so pleased to see how it is going.”

Photo by Laura Wood: Dr. Richard Cosentino, right,  and his wife, Jessie, joined the Bearcat mascots and Lander students for the official tree lighting on campus.