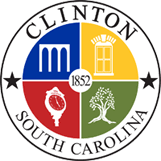 His first day on the job will be May 1.  The City of Clinton offered Brooks a 2-year contract with an annual salary of $122,500.

Brooks received a Bachelors’ degree in biology from the College of Charleston with a focus in environmental studies. He has been a public servant for over 20 years working in State, County, and municipal government.

Brooks has served as the Town Administrator in Saluda, SC for over ten years bringing in investment and economic growth to the community. In addition to his governmental experience, Brooks created Green Wing Consulting. His consulting services have helped grow manufacturing in South Carolina by representing corporations that have created several hundred jobs and have invested millions of dollars into our State. His consultingservices also include renewable energy  development where he currently assists the Pacolet Milliken Company.

Brooks and his wife Margot have four children and currently reside in Saluda County.