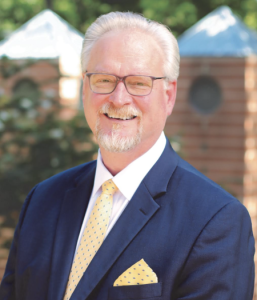 Dr. Rick Christman has been appointed acting president of Columbia International University by CIU’s Board of Trustees. Christman, who has been serving CIU as executive vice president for three years, takes the leadership of the university in place of President Dr. Mark A. Smith who is recovering from a blood clot in his brain in November, resulting in brain surgery to remove the blood clot.

Board Chairman Dr. Hans Finzel said in a statement to CIU’s faculty and staff that as prayer continues for Dr. Smith and his family, “the CIU Board of Trustees has determined that the uncertainties regarding his recovery necessitate the appointment of an acting president. Consequently, we have unanimously chosen Dr. Rick Christman to fill this role.”

“As Executive Vice President, Dr. Christman has led CIU in the wonderful growth of the student body over these last three years and we have every confidence that our momentum will continue under his leadership,” Finzel said. “Dr. Christman has built a great team around him allowing for delegation of his current responsibilities.”

Before coming to CIU, Christman served as the academic dean and associate vice president for the School of Graduate and Continuing Studies (SGCS) at Trevecca Nazarene University in Nashville, Tennessee.

Christman is a graduate of God’s Bible School and College in Cincinnati, earning a Bachelor of Religious Education (B.R.E.), and a graduate of Indiana Wesleyan University, earning two master’s degrees; an M.A. in Advanced Leadership Studies and an M.A. in Ministry. Additionally, he earned his Doctorate in Education (Ed.D. in Organizational Leadership) from Indiana Wesleyan University.

Overall, Christman has served 17 years in Christian higher education as a professor and administrator, and has ministered for over 25 years in the Wesleyan Church as a pastor and educator. He also has experience in the printing industry including plant manager of Foster Business Forms and Foster Commercial Press in Columbus, Ohio.

Christman leads with a passionate, conservative voice, caring for both the institution he serves and the people who serve with him. He understands the critical need for Christian higher education and the need to preserve and to instill Christian values and ideals into students from all walks of life and at different stages of life.

Christman has been married to Cheri (Manning) Christman, for 38 years. They have three grown children; two sons Ricky Jr. and Andrew, and a daughter Julia Sorley, and several grandchildren.

Founded in 1923, Columbia International University is private, Christian and multidenominational. CIU specializes in Bible-centered professional development that prepares students to impact the nations with the message of Christ in ministry, missions and the marketplace. For 100 years, CIU has been recognized for its emphasis on biblical authority and world evangelization. www.ciu.edu