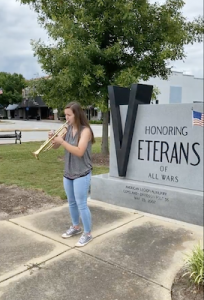 Taps is the name of the final call of the evening in the United States military.

Simple but elegant, this military bugle call is so easily recognized and evokes more emotion than any other. The melody is both eloquent and haunting.

Today, “Taps” is sounded as the final call every evening on military installations and at military funerals. In 2012 Congress recognized “Taps” as the “National Song of Remembrance.”

As part of “Taps Across America,” Clinton High School Student Kate Wages honored fallen veterans on Memorial Day by performing the song at the Veteran monument in downtown Clinton.

“Taps Across America” was started by CBS in 2020 as a way to honor our fallen heroes on Memorial Day during the pandemic. Again, this year, musicians across the country played Taps at precisely 3:00 pm. on Memorial Day.

Clinton, South Carolina was well represented in this movement. Thank you, Kate Wages for honoring America’s fallen soldiers in such a special way.

“There is something singularly beautiful and appropriate in the music of this wonderful call. Its strains are melancholy, yet full of rest and peace. Its echoes linger in the heart long after its tones have ceased to vibrate in the air.”-Oliver Willcox Norton

Click below to watch the video provided by Jakob Pountain.