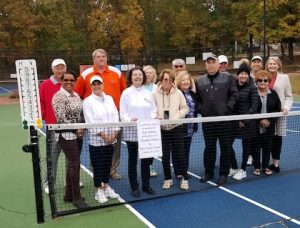 The scoreboards were dedicated to the memory of Dan Wilder and in honor of his wife, Martha Wilder, of Clinton.  The Wilders have devoted 25+ years promoting tennis in the community through USTA sanctioned matches, working with local high schools to organize teams, and sponsoring summer youth camps.

Dan and Martha Wilder established the Clinton-Laurens-Newberry Tennis Association (CLNTA) through USTennis Association in 1997. Since then, they have held sanctioned tournaments, round robins, youth camps. They wrote the grant for the six courts at Laurens City Park and built, captained several adult league teams, and assisted USTA Net Generation with help from Wilson Smith and Cassandra Kimmerly. CLNTA adult teams have advanced to many State Championships and three times to Sectionals coming in first and second places.

The CLNTA just recently held a fundraiser partnering with the Laurens County Humane Society at their site in Clinton with tennis games on their gravel parking lot and in the fenced yard with the dogs, and many other activities. Some of the people assisting with this fundraiser included Lynne Todd, LHS girls and boys tennis coach and outstanding young tennis players Maya Ramirez and Kenzie Long.

“There are so many great memories related to the work (and fun) that Dan and I have done for the Clinton Laurens Newberry Tennis Association,” said Martha Wilder. “None of this would have been possible without my partner, Dan, and I am honored to have the scoreboards dedicated to acknowledge our efforts.”