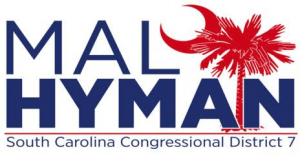 Coker College Professor of Sociology Mal Hyman will announce his run for the Democratic nomination for South Carolina’s 7th Congressional District on Thursday, Feb. 11, at 11:45 a.m. at the Coker College Music Recital Hall.

His campaign will focus on common sense for the common good, with emphasis on Congress investing more in America in an effort to create more jobs, opportunity, security and sustainability.

Hyman has dedicated more than 40 years of his life to education, including 28 years at Coker College, numerous public schools, a medium security men’s prison and the S.C. Governor’s School for Science and Mathematics. In his time at Coker, he has coordinated forums on a number of public interest topics such as ethnic harmony, homelessness, globalization, sustainable energy and police procedures. He has worked for human rights around the world, including in Mexico, Nicaragua, the West Bank, El Salvador, Cuba and Colombia.

Coker College is a student-focused, private liberal arts college located in Hartsville, South Carolina. Coker combines round table, discussion-based learning with hands-on experiences to encourage active participation in and out of the classroom. A supportive, close-knit community prepares Coker students with the confidence and practical life skills they need to reach their personal best, in college and beyond.

Founded in 1908, Coker is a bachelor’s and master’s degree-granting institution and competes in 19 NCAA Division II sports. Coker is ranked among the “Best Colleges” in the South by U.S. News & World Report as well as The Princeton Review, and by Washington Monthly as No. 5 for value among colleges in the Southeast region.