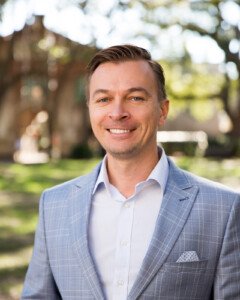 Max Kovalov, director of the John Edwin Mroz Global Leadership Institute and an international studies professor at the College of Charleston, is closely studying the war in Ukraine.

Kovalov’s interest in the conflict isn’t just due to his scholarly pursuits. He was born in Ukraine and members of his family still live there, including his parents.

Some headlines refer to what’s happening in Ukraine as a conflict, but it is indeed a war, correct?

It certainly is a war. Ukraine was first invaded by Russia in 2014 when Russia annexed Ukrainian territory and started supporting separatist movements. Until this year, the war was limited to two eastern regions of Ukraine. Russia raised the stakes on Feb. 24, 2022, by launching a full-scale invasion.

Throughout the past year, Russia had been accumulating troops on the Ukrainian border. Reports regarding the number of troops varied, but American intelligence sources estimated some 175,000 soldiers were encamped along the border by February. That’s a significant number because it’s what those same sources deemed necessary to carry out a full-scale invasion. But there is no ambiguity as to how this situation is being regarded by Ukrainian media, civilians or the government. It’s a war. And it is a war of aggression that is unnecessary and unprovoked. Ukrainian cities have been bombed and some decimated. And Ukrainian civilians have been targeted.

What do you see as the root of this invasion?

That’s a question that we’ve been grappling with for many months. Actually, since 2014 we’ve been trying to understand Vladimir Putin’s aggression because that’s when Russia forcibly annexed the Crimean Peninsula.

In my view, there’s a lot of inconsistency in the Russian messages we get regarding the war. We’ve been told that the goals of what the Russian leaders call “a special military operation” are to de-Nazify Ukraine, de-militarize Ukraine and to receive written guarantees that Ukraine will not join NATO (North Atlantic Treaty Organization).

Now, it’s true that over the past 25 years, there have been several rounds of expansion by NATO and numerous eastern European countries have joined. The Kremlin has used that information to justify its security concerns, and Russian media have published that the Russian government sees itself as surrounded by an unfriendly military alliance (NATO). Unfortunately, that view doesn’t take into account the fact that NATO is a defensive alliance. In Russian minds and in Russian perception, NATO is an aggressive alliance that is trying to encroach on the country’s border. But, in early 2022, Ukraine was no closer to NATO membership than it was a decade before.

Some sources use the term ‘imperialistic nostalgia’ to refer to Russian President Vladimir Putin’s mindset, which relates to the long history of conflict between Russia and Ukraine. How do you think that factors into what’s happening now?

The term imperialistic nostalgia is based on the idea that Russia, having lost territory due to the collapse of the USSR in 1991 and the demise of Soviet communism, is trying to reacquire its influence over countries in this region. Russia’s sphere of influence used to expand as far west as Poland, Czechoslovakia and the Baltic states.

There’s also the notion that Vladimir Putin put forth in his summer essay that Russians and Ukrainians are historically one people. I’m not a historian, but from the perspective of those who study the history of Eastern Europe, that’s a selective reading of history. Roughly 1,000 years ago, a series of principalities were created under the name Kyivan-Rus. These did not originate in Moscow. At that time, Moscow did not exist. Kyivan-Rus people were the descendants of Vikings, and as a city state, Kyiv did not come under the dominance of Moscow until more recent history, say in the last 400 to 500 years. So, to assert that Russians and Ukrainians are one people that have always held that status is not accurate.

Are resources such as agriculture playing a part in motivating this war?

It would be easy to assume that resources are a big part of Russia’s motivation to attack and subdue Ukraine because the Russian economy is heavily dependent upon the extraction of resources – primarily oil and gas. It’s true that Ukraine is an important agricultural resource not just for Russia, but also for European, Middle Eastern, African and Asian countries as well. Russia and Ukraine are two of the top five wheat exporters in the world. Ukraine was the breadbasket of the Russian empire and the USSR. But agriculture isn’t an easy resource to extract, and given that, it’s less important to Russian interests. For Russia, the driving force behind the invasion is to deny independent existence for Ukraine.

Are there historic equivalents that might help us better understand the context for this war?

Yes. The attempts of the USSR to maintain a sphere of influence in Hungary in 1956, in Czechoslovakia in 1968 and in Poland in 1980 all apply. Those countries weren’t officially members of the USSR, but they were satellite states, meaning that major policy decisions were coordinated with the authorities in the Kremlin. Those countries weren’t independent, and there were several times when each experienced domestic efforts to break away from Soviet control.

When the Czechoslovaks tried to reform socialist institutions in 1968, the Soviets warned the Czechoslovaks to stop the reforms, and then invaded with tanks to end the so-called Prague Spring. USSR authorities described that as an act of liberation, but the Czechoslovaks people didn’t understand why tanks were rolling down their streets and ultimately asked the Soviet soldiers to go home. In Soviet history books, these actions are referred to as “normalization.” The states were being normalized because they had deviated from the course laid out by the USSR. In my mind, the Kremlin’s goal to demilitarize and de-Nazify Ukraine is very similar. Russia would like to normalize Ukraine to the Russian vision.

In what ways do you bring this topic into the classes you’re teaching?

During the first two weeks of the invasion, I offered several general information sessions in my classes. In my Intro to Europe course, I have been touching upon the humanitarian crisis that is unfolding due to this war. What we’re seeing is the biggest humanitarian crisis since World War II. Up until this semester, I was using the statistics from the 2015 refugee crisis in which roughly a million people left Syria, Afghanistan, Iraq and other nations to seek refuge in European countries. That was the count for the entire year. In the first five weeks of the Russian invasion of Ukraine, 4 million Ukrainians have fled the country and another 10 to 12 million have been internally displaced. Together, that’s about 25% of the country’s population. Roughly 2.5 to 3 million Ukrainians are hosted by Poland alone, so it’s a catastrophe not just for Ukraine, but for its neighbors as well. And, unfortunately, this crisis won’t end when the aggression ends.

Students do pay attention to world affairs, and they are curious about the invasion and the roles of Russia, the U.S. and the E.U. This is an opportunity to help them better understand other parts of the interconnected world.

What are the most evident consequences of this war for the U.S.?

There are practical implications, and we’re seeing those in the price of gas. But there are also intangible consequences, and those are democratic values and international security. For the past 30 years, Ukraine has been building democratic institutions. The country is currently a functioning democracy; not a perfect one, but definitely functioning. And that’s where U.S. values align with those of Ukraine. In the U.S., we want to support Ukraine’s adoption of democratic values, institutions and reforms. European security is also a major concern for the U.S. If Ukraine falls today, there will be major implications for the security of Poland, Moldova, Georgia and the Baltic states.