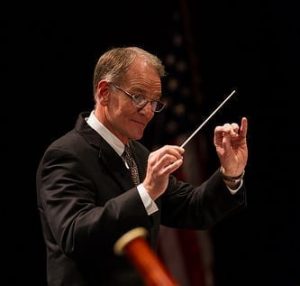 GREENVILLE, SC – Dr. Daniel Turner, professor and Director of Bands at Bob Jones University, has been appointed the new music director for the Greenville Concert Band after the organization conducted a six month search. The Greenville Concert Band was founded more than eighty years ago as an all-volunteer group of woodwind and brass musicians in the Upstate who value offering great concert band music to the community.

Turner was recently inducted into the American Bandmasters Association, and is one of three hundred members internationally; ten band directors from South Carolina have been accepted since the organization’s founding in 1929. Turner is the Director of the Symphonic Wind Band, Director of Instrumental Activities, and professor of music education and private tuba at Bob Jones University.

“I am very pleased to be able to work with this group of fine musicians in our community,” Turner said. “The Greenville Concert Band has a rich tradition of providing music for the Upstate through all-volunteer musicians who love music and want to bring the riches of concert band music to the community. They offer real gifts through their passion for music and their skill as performers and instrumentalists, and I’m looking forward to being a part of this legacy. I am honored to receive this appointment.”

“Dr. Turner has an unmatched passion for band music and a real talent for drawing the best musicianship out of our players,” said Stan Widener, President of the GCB board of directors. “He also shares our vision for building appreciation of fine band music in the Greenville community, and providing an opportunity for musicians to continue their craft within a performing band.”

Turner received both his doctorate and his MS in music education from the University of Illinois; he received a bachelor’s degree in music education from Bob Jones University. As a performer, Turner is in demand as a tubist in various public venues, and plays in the Foundation Brass Sextet as well as in the Anderson, South Carolina chamber orchestra. He is also active as a conductor at numerous band clinics and festivals in the South and Midwest. Besides his membership in the ABA, he is a member of the National Association for Music Education, The South Carolina Music Educators Association, the National Band Association, and The College Band Directors National Association.

The Greenville Concert Band’s first performances of the season will be October 15 at 3 p.m. in the NOMA Square beside the downtown Hyatt in Greenville, and October 22 at 3 p.m. at the Greer City Hall. The concert will include The Music Makers by Alfred Reed, Gustav Holst’s First Suite in E-flat, and music reminiscent of European Oktoberfest celebrations. The concerts are provided free of charge to the public.

GCB welcomes new members of the band subject to need and section size limitations, and interested performers are invited to contact the band. As a 501(c)(3) non-profit, the organization also welcomes donations which are tax-deductible. Donations may be mailed to Greenville Concert Band, PO Box 6984, Greenville SC 29606.

To learn more about the Greenville Concert Band, visit http://www.greenvilleconcertband.us, like https://www.facebook.com/greenvilleconcertband, or contact them at 864.214.5807. To learn more about Turner’s conducting and tuba performances, or to simply chat about music, connect through linkedin.com/in/danielturnerconductor/ or at [email protected].