It’s a good thing titles cannot be copyrighted. With apologies to Erica Jong, I title this self-confessional column, “Far of Flying.” I cannot say I fear flying, but I am a most reluctant air traveler. I have reason to be. I’ve had two close encounters with an air disaster. The first was as a boy. A man with his shiny new pilot’s license took me up for a spin in his Cessna. It wasn’t much of a trip. We took off, circled, and landed.

He looked as white as a ghost.

He had made two rookie mistakes. He misjudged my weight (I’m heavier than I appear), and he took off with the wind at his tail when he should have taken off into the wind. More lift that way.

“We nearly crashed into the trees at the end of the runway,” he explained.

That was the end of our flights.

The second time scared me good. The first time didn’t. I had no idea of my inaugural pilot’s two mistakes. I was flying for the first time ever and it thrilled me.

The second time shook me up. I was working as a scriptwriter and cinematographer on a documentary about the Carolina bays. We needed aerials to show the bays’ distinctive elliptical shape and parallel alignment. A pilot with Vietnam chopper credentials, David “Super Scott” Scott was to take us by helicopter to film aerials of prominent bays in Horry County, South Carolina.

The helicopter refused to start, a warning perhaps. No problem. Scott said he’d fly us over in a small fixed-wing craft, a Cessna best I recall. We took off and soon were over Horry County. Strapped in as I was, I leaned out and filmed bays below. Their sand rims—white crescents—stood out in contrast to the dark green of the bays. We shot a good bit of footage and headed back to Columbia Metropolitan Airport.

Coming into view of the airport, we saw a commercial airliner approaching the runway we were to use.

“We don’t want to get caught in its prop wash,” said Super Scott. “We’ll go around.”

We circled and then made our approach. All seemed well until we were about 200 feet over the runway. Prop wash caught us anyway, flipping the plane’s wings vertical. As Super Scott whipped the plane level, camera gear slammed into the back of my head and we landed and rolled down the runway. 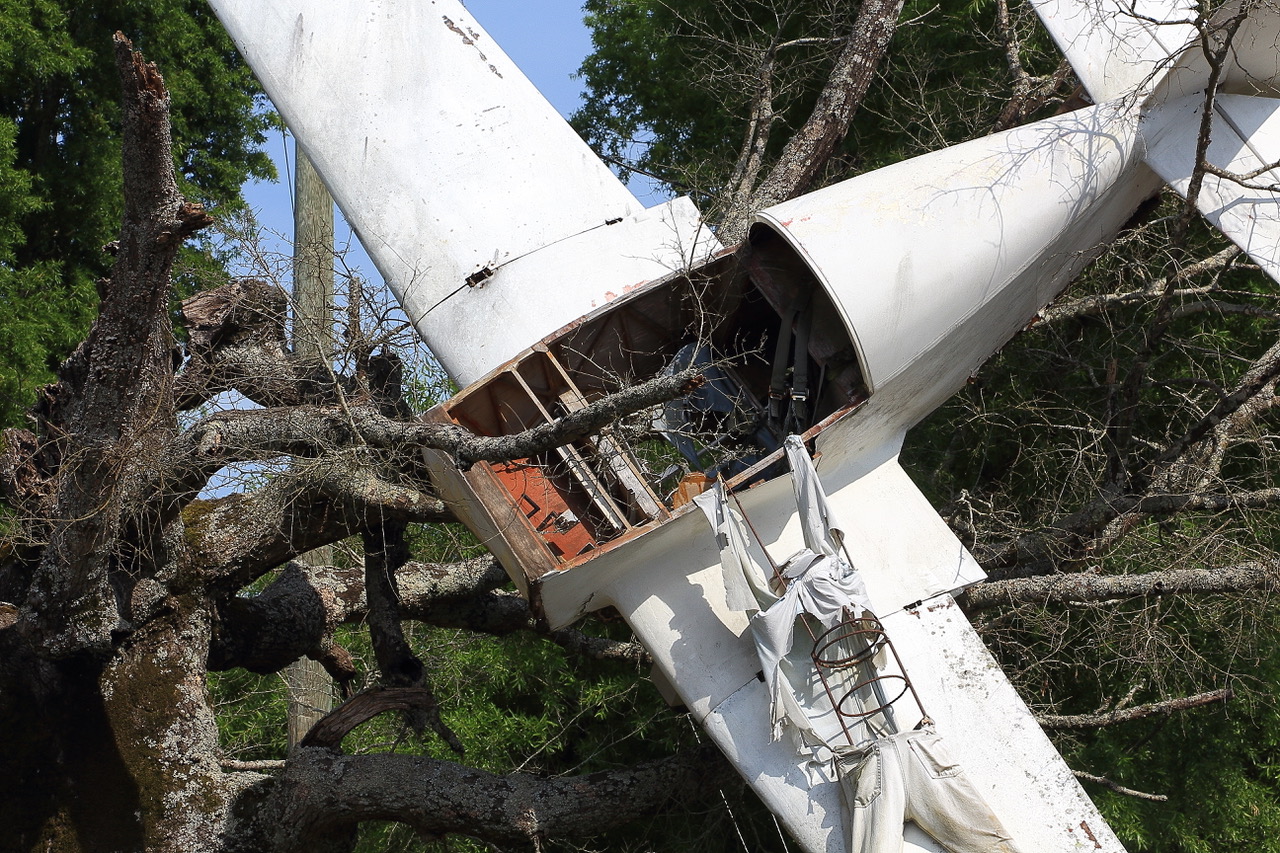 Upon first seeing this art installation, drivers along Highway 34 called 911.

Since my two mishaps, I’ve flown to Winnipeg, Los Angeles, all over the states and Europe twice, air-hopping all over Germany, France, Spain, and Italy. But, the next mishap might be my final act in the drama called Air Travel. The third time’s the charm, people like to say. Thus, my reluctance to fly. I will fly but I choose with great care the when where and why.

I’ve known one person to die in an air crash, a classmate who was a missionary in South America I believe it was. He was a fine man and deserved a better fate. 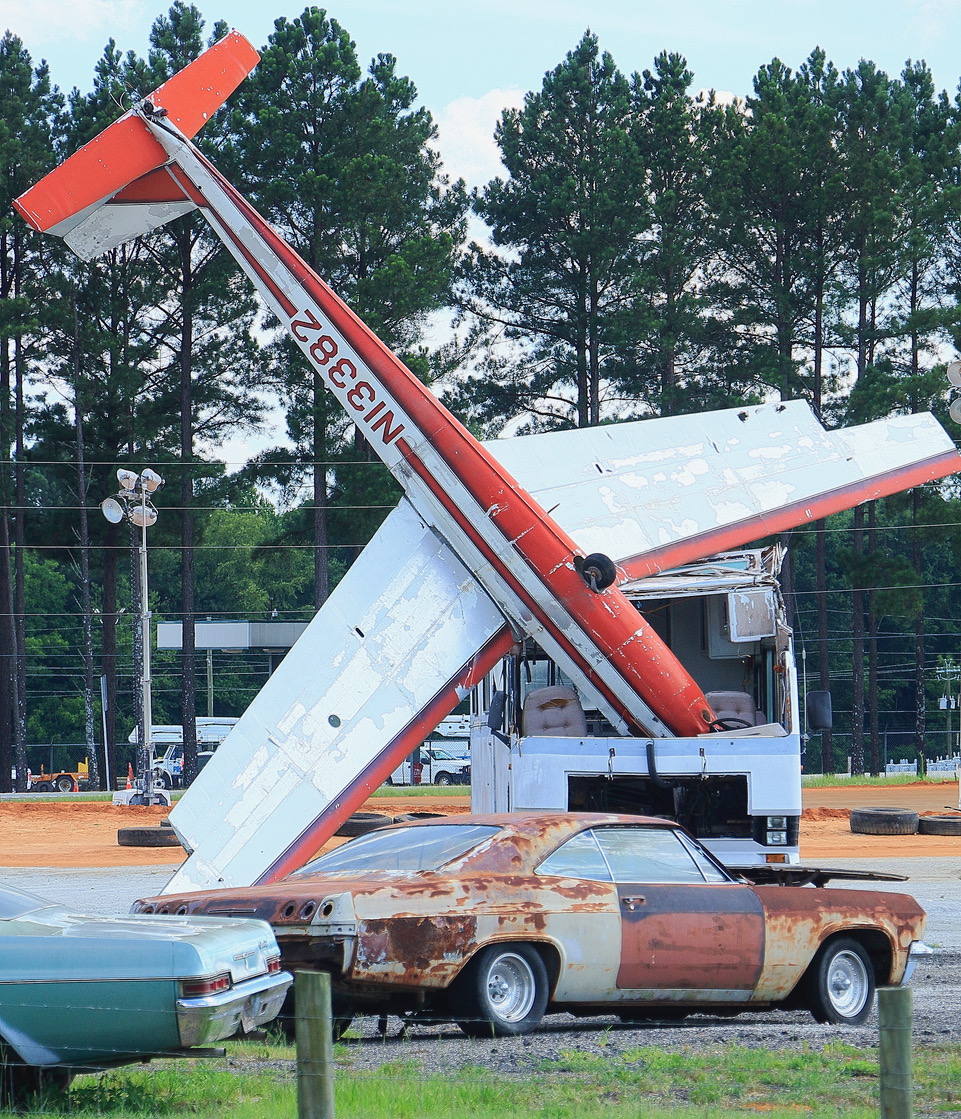 It catches the eye, but tightens the stomach for some of us.

Another fear I have is witnessing a crash. I’ve seen roadside “art” installations of what’s supposed to be humorous take offs on airplane crashes. There used to be a glider in a tree near Winnsboro, South Carolina. And there’s one in Georgia, the one you see here. They’re a tad amusing, but deep inside me fear lurks.

Fear of flying. For a few years, I made the mistake of watching a show, “Seconds To Disaster,” that recreated air disasters in a realistic way. Toward the program’s end they showed footage of the actual crash site. That did nothing to reduce my fear of flying or my reluctance to defy gravity.

I’ve heard the arguments, that flying’s safer than driving, and I’ve heard the old saw that you’ll go when it’s your time to go. But I heard a comedian make a joke about all this. “Hey, it might be the pilot’s time to go, and he’ll take me with him.” There’s another saying that comes to bear here: many a truth is said in jest.