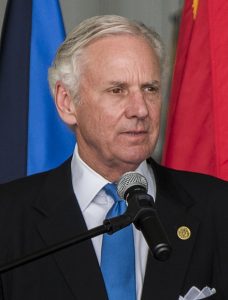 Governor Henry McMaster today was joined by S.C. Department of Veterans’ Affairs Secretary William Grimsley, members of the General Assembly, and veterans for a ceremonial bill signing of H. 3247, the Workforce Enhancement and Military Recognition Act, a bill that provides a full income tax exemption for veterans’ military retirement pay. Governor McMaster has called upon the General Assembly to pass this bill in every one of his executive budgets.

“Today is a monumental day for veterans in South Carolina. This tax cut for those who have served our country has been a top priority of mine for over five years now,” said Governor Henry McMaster. “This important step adds to South Carolina’s reputation as the most military-friendly state in the country and further incentivizes our nation’s veterans to live, work and raise their families in South Carolina.”

“South Carolina’s military community is critical not only to our state but our advancement as a whole,” said S.C. House of Representative Speaker Murrell Smith. “This is a way we can say thank you to our veterans and thank you to those who have sacrificed for our country.”

This bill passed unanimously in both the House and Senate.