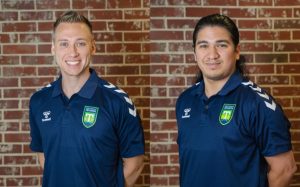 “We’re thrilled to have Josh and Gio on our team,” said Chris Lewis, president of the Greenville Triumph SC. “Josh and Gio bring a wealth of knowledge and passion to our front office team that will be essential to helping us carrying out our organization’s mission to positively impact the community.”

As the soccer club’s new account executive, Gio Cañas, is responsible for actively selling season, group, and promotion ticket packages for the Greenville Triumph and Greenville Liberty. An ambassador of the club since its inaugural season in 2018, Gio will work with the community in building relationships and bringing soccer to the public through a variety of club initiatives. Cañas is a graduate of the University of South Carolina Upstate, where he studied business marketing and international business.

The Greenville Triumph kicks off its fifth season at home against the Richmond Kickers on March 25 and will release the full season schedule Jan. 11. The Greenville Liberty is expected to begin its second season in early May. For tickets and information, visit www.greenvilletriumph.com and www.greenvilleliberty.com