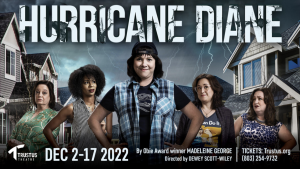 Get your Greek on, Desperate Housewives-style. Hurricane Diane opens at Trustus Theatre on Friday, December 2nd and runs for ten shows through December 17th. In this Obie-winning comedy with a twist, Pulitzer Prize finalist Madeline George pens a hilarious evisceration of the blind eye we all turn to climate change and the bacchanalian catharsis that awaits us, even in our own backyards. Hurricane Diane is directed by Artistic Director Dewey Scott-Wiley, and features Michelle Jacobs, Christine Hellman, Brittany Hammock, Jessica Fichter, and Sheldon Paschal.

A large storm is rolling into Jersey just as permaculture landscaper Diane descends upon four unsuspecting housewives and their comfortable cul-de-sac lives. Little do they know that Diane is actually the Greek god Dionysus, returned to Earth to save humankind from climate disaster. She’s worried that humanity is readying to wipe itself out via climate cataclysm, forcing her to high tail it back to boring old Olympus. But more than that, she wants Maenads: wild, possessed women who will abandon their lives to join in her revels. As in The Bacchae, Diane proves to be quite the character. Can Diane’s butch charms save the “girls” of Monmouth County, New Jersey and, maybe, the entire world? Hurricane Diane is a show Vulture calls “[…] fantastic, heartbreaking. Full of keen observation and profound human affection, the play both lifts us up and wrings us out.”

Longtime Trustus company member and current Artistic Director Dewey Scott-Wiley directs the climate comedy after the show was suggested to her by New York playwright and former Trustus literary manager, Sarah Hammond. “She knew this show had the right amount of hilarity and poignancy for Trustus,” she says. 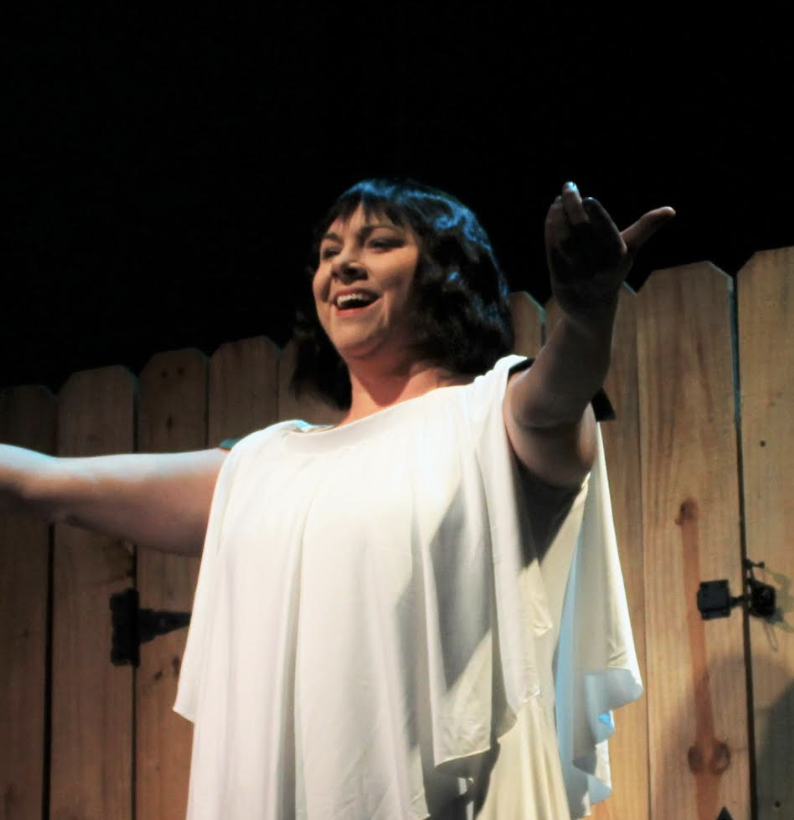 Trustus company member Sheldon Paschal, fresh from her roles in this summer’s House Calls and the fall’s Rocky Horror Show, takes on the role of Diane. “This is by far the most unique character I’ve ever had the privilege to explore,” she says. “I’ve researched Dionysus as well as permaculture to better visualize the world Diane is seeking. Diane has a natural charisma that leads some of the other characters to, in stages, fully trust and submit to her. Diane exudes such joy and passion so deeply and that that drives her actions. It is contagious.” Though the show is a “blast to perform,” Paschal notes the darker, more thought-provoking plot. “While this show is a blast to perform and has been equally enjoyable in process as well,” she says, “it also has a deeper significance considering conversations surrounding the reality of current times and climate change.”

“Directing an all-female cast in a smart and funny play about friendship in the face of a pending disaster is an amazing treat,” Scott-Wiley says. “We all need a good laugh for this holiday season, and Hurricane Diane delivers a torrent.” Paschal agrees: “I am incredibly excited to perform this piece with such a generous and skilled cast and crew. I’m hoping audiences will take away what I believe Madeleine George is fundamentally saying about the Earth and ourselves: be convicted in your most authentic and raw self. Get back to it if it’s been suppressed, damaged or lost and find joy in it, revel in it.”

Hurricane Diane opens Friday, December 2nd at 8:00pm and runs through Saturday, December 17th. All Trustus matinees will now be held at 2:00pm. The box office and bar open one hour prior to show time. Hurricane Diane contains material not suitable for all ages. Viewer discretion is advised. If you have any questions, please contact the Box Office.