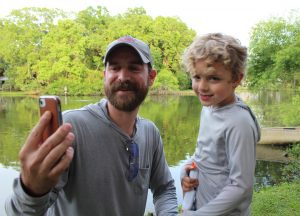 In difficult economic times, Trident United Way launched a new and unique fundraising event and community response was overwhelming. Including the final round, the event raised more than $65,000 to support community programs.

The playoff style bracket featured competitors facing off in weekly competitions where the most votes would move to the next round. Each $1 donated equals a vote.

If you missed it, take a listen to one of the songs that got Gritty Flyright
https://www.youtube.com/watch?app=desktop&v=4XqUo5R9Pm0

He says helping the community and promoting Charleston area music is a win-win. His neighbors in James Island held a giant party in his honor, including a pontoon boat concert for fans who made generous donations to Trident United Way on his behalf.

Click below for a soundbite with Liston, and video of his reaction of the winning announcement.

SOUNDBITE: “When we started out my wife said if we can raise $50 doing what you love doing, then it’s worth it. So I’m glad we jumped in, I’m thankful for the community, and it’s $50,000. It’s special for Charleston, Berkeley, Dorchester Counties. It’s a huge win for everybody involved.”

Final calculations went from $50,000 early in the last day of the competition to more than $65,000 when all votes were completed.

Money raised during tournament voting will support Trident United Way in its ongoing mission to improve the education, financial stability and health of every Tri-County community member. Each dollar vote goes to help people in need during these tough economic times.

More than $11,000 in overall prizes – grand prize winner will receive:

PICTURED: Wes Liston and his son learning of his Sing United win in real time.

Celebrating more than 76 years of service, Trident United Way is a catalyst for measurable community transformation in education, financial stability and health. According to the Chronicle of Philanthropy, United Way is America’s favorite charity. Learn more at tuw.org.