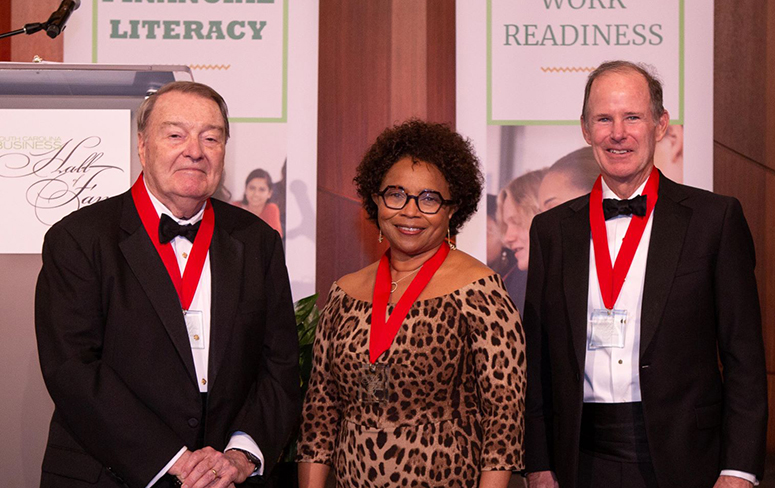 Junior Achievement of Greater South Carolina announced three new Laureates inducted to the South Carolina Business Hall of Fame, a distinction which honors lifetime achievement for those who have made a positive impact on our state. Giants in their respective industries and champions of free enterprise, this year’s inductees are Marva Smalls, global head of inclusion at ViacomCBS and executive vice president, public affairs, kids and family entertainment brands at ViacomCBS Media Networks; Frank Warner Brumley, Chairman/CEO of the Daniel Island Company; and Richard (Rick) Pennell Jr., president and CEO of Metromont Corporation.

Established in 1985 by Junior Achievement, the South Carolina Business Hall of Fame honors business leaders who have left their mark on our state by exhibiting and personifying four core values: integrity, leadership, respect and excellence/history of civic achievement.

Over the course of her more than 30-year public and private sector career, Marva Smalls has been a catalyst for positive change, equality and representation. While at Viacom, she has developed best-in-class diversity and inclusion initiatives and advisory councils that inspired employee engagement and fostered a collaborative culture, while driving innovation and business results. Before joining Viacom in 1993, Smalls served as chief of staff for Congressman Robin Tallon (D-SC). She also served in South Carolina Gov. Richard Riley’s administration as director of the state’s inaugural Private Industries Council. Smalls is a founding member of the Black Economic Alliance and serves on numerous boards including the American Theatre Wing, the International African American Museum, the James Beard Foundation and Synovus Bank/South Carolina. She also created the Marva Smalls Endowment, which has donated more than $1.5 million to youth and family programs and $1 million to the Ronald McNair Center to support aerospace students from underrepresented populations. Smalls holds graduate and undergraduate degrees from the University of South Carolina and splits her time between New York and her home state of South Carolina.

One would be hard-pressed to find someone who has done more coastal development and historical preservation in the State of South Carolina than Frank Brumley. Since 1970, when he began his career with the Sea Pines Company of Hilton Head Island, South Carolina, to his time as CEO of the Kiawah Island Company, and as a partner in the development of Wild Dunes, Brumley has worked to create a vision for our state that includes capitalizing on its natural beauty, while attracting industry and investment to ensure prosperity and long-term success.  While he currently serves as Chairman/CEO of the Daniel Island Company, Brumley has also developed a wide range of commercial projects, including apartments, shopping centers, office buildings and industrial parks. These include Palmetto Commerce Park in North Charleston, which is home to the Mercedes-Benz Vans plant, Boeing Interiors upfit facility, Roper Hospital Office Center and the Charleston County Emergency Response Center. Putting his degree in business and finance from the University of Georgia and an executive MBA from the University of North Carolina Keenan School of Business to good use, Brumley also enjoyed a long involvement in the banking industry, serving on the boards of several financial institutions, including NBSC, Wachovia and Synovus Bank.

A firm proponent of community service, Brumley has also served as a past president/trustee of the Historic Charleston Foundation, Coastal Community Foundation, Ashley Hall School, Trident Academy, SC State Chamber of Commerce, SC Aquarium, Gibbes Art Gallery, MUSC Foundation, Lowcountry Open Land Trust and Charleston Ronald McDonald House and as a trustee appointed by the governor to the Nature Conservancy of South Carolina, a trustee of the Drayton Hall Preservation Trust, and a member of the Board of Advisors of the Terry Business College at the University of Georgia.

Investing in people and the community has been a hallmark of Rick Pennell’s career. As president and CEO of Metromont Corporation, Pennell has taken the company from its roots in building roads and bridges to becoming one of the largest precast, prestressed concrete manufacturers in the U.S. with products used in everything from schools and office buildings to parking decks, industrial plants and stadiums. Through his vision and leadership, the company has seen significant revenue increases and has grown to more than 1,500 associates in plants across the Southeast, including South Carolina, Georgia, Florida and Virginia. In 1983, Rick joined the company started by his grandfather, Capt. J. Roy Pennell, working his way up through the ranks from his early days shoveling concrete in the company’s plants to making block and pipe. The ultimate testament to Pennell’s commitment to developing a corporate culture that treats everyone like family, invests in its people and encourages employees to grow through continued education and opportunities for advancement is the fact that a large number of employees have been with the company for 40 or more years.

A graduate of the University of Georgia with a B.S. in accounting, Pennell has helped to advance numerous nonprofit organizations across Upstate South Carolina, including serving as director and chairman of the board at the YMCA and on the boards of the South Carolina Children’s Theater, Peace Center for the Performing Arts, Greenville Symphony, American Red Cross and Artisphere. He is also a current trustee of the University of Georgia Foundation and Converse College, as well as a founding member of Altus Group, a partnership of precast concrete manufacturers and industry suppliers dedicated to innovation, where he previously served as president and board member.

“As visionary business leaders with a strong commitment to the community, these South Carolina Business Hall of Fame Laureates serve as role models to current and future generations, inspiring them not just to excel but to give back,” said Junior Achievement of Greater S.C. President and Chief Executive Officer, Casey Pash. “These laureates are not only among the best and brightest in their respective fields and stalwarts in paying it forward, but they are also patient. While they were initially to be honored in March of 2020, due to COVID, they could not be officially inducted until this year. We thank them for their graciousness, honor their legacy of good and promise to continue to build on their success by continuing our work to inspire and motivate students and our dedication to recognizing the best in business in our state.”

The South Carolina Hall of Fame 2021 laureates were honored in a small private ceremony for friends and family, which was live-streamed to allow for greater viewership. Sponsors for the event included Blue Cross Blue Shield of South Carolina, Planned Administrators Inc., Publix Supermarket Charities, Synovus, Truist and Ameris Bank.

Junior Achievement is the world’s largest organization dedicated to giving young people the knowledge and skills they need to own their economic success, plan for their future, and make smart academic and economic choices. JA programs are delivered by corporate and community volunteers and provides relevant, hands-on experiences that give students from kindergarten through high school knowledge and skills in financial literacy, work readiness and entrepreneurship. Today, JAGSC reaches more than 18,000 students per year in 43 counties in South Carolina. Over the last 52 years JAGSC has impacted over 775,000 youth. JAGSC is a member of JAUSA. Please visit https://greatersc.ja.org/ for more information.