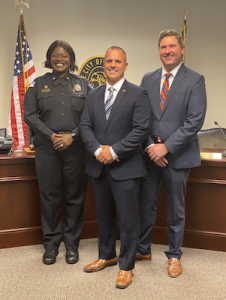 “We are committed to pursuing the safety, peace, and harmony of our community, and the City of Laurens Police Department plays a critical role in pursuing those goals,” said Mayor Senn.  “The role of the Chief of Police is equally critical in supporting and leading our police toward that shared vision as they carry out the difficult and often dangerous work they are called to do.  After a thorough search, we believe we have found the right individual to lead and serve in this critical role.”

Grounsell brings over 24 years of extensive law enforcement and leadership experience to Laurens, having previously served as Chief of Police for the City of Simpsonville from 2012-2016.  While there, he led a department of more than 50 officers and employees serving a city with a population of more than 23,000 residents.  During his time with the Simpsonville Police Department, drug/narcotics investigations and arrests increased by 287% and he implemented more than 40 community-based policing programs.  As a result of these and other improvements, the City of Simpsonville rose from its raking of 28th to the number one safest city in South Carolina after just two years.

Most recently, Grounsell has served as the In-Country Project Manager for Tetra Tech, Inc., a firm holding a contract with the U.S. Department of State responsible for training, equipping, mentoring, and supporting the National Police Force of Nigeria.  From 2017 to 2020 Grounsell’s work with Tetra Tech led him to Monrovia, Liberia and Port-au-Prince, Haiti where he served as a Senior Law Enforcement Advisor to the Liberian Police Force and US Contingent Commander of US Police Advisors in Haiti.

The experience gained in these overseas positions provided Grounsell with perspective that Laurens’ leaders believe make him uniquely qualified to lead the city’s police.

“Working in Africa, I had the responsibility of guiding and advising the Inspector General, a presidential appointee responsible for a national police force of 5,000 police officers at 198 police stations serving 5 million people.  This required an ability to make sound policy decisions, conduct strategic long-range planning and project management, budgeting, and training,” said Grounsell.  “In Haiti, we encountered one of the most difficult policing environments you can imagine, but we worked to effectively combat narcotics, kidnapping, and violent crimes.”

The leadership, management, and crime-fighting experience that Grounsell gained working overseas was invaluable to his professional development, but equally important was his experience working collaboratively with local leaders and community members.

“I have lived and worked in communities in which I was part of a small minority.  While my experience is different from the experiences of members of our minority communities here in South Carolina, I believe my time overseas left a lasting impression on me that strengthened my belief that everyone should be treated equally under the law no matter what their ethnicity, sex, social status, income, beliefs, or anything else that people have used to divide us.”

The search for a new chief began upon the nomination of Chief Chrissie Latimore to be U. S. Marshall for the District of South Carolina by the White House in June.  Chief Latimore holds the distinction of serving as both the first female and first African American Police Chief.  City leaders understood the importance of maintaining and building a culture in the Police Department which is diverse, attractive, and welcoming to the best of the best law enforcement officers, and which is intentional about strengthening relationships with minority communities.

“We are proud of the progress we see in the City of Laurens,” said Mayor Senn, “but that progress, especially when it comes to promoting equality and diversity isn’t achieved by one hiring decision.  It is an ongoing process that requires commitment to continually pursuing better relationships and best practices.  Grounsell’s commitment to community policing and his proven record of improving the safety of his community through this approach holds tremendous promise for the future of the City of Laurens.”

“I wholeheartedly support the Mayor’s decision to hire Chief Grounsell, I believe he has the experience and vision necessary to lead the department, and I feel a sense of relief that I know I will be leaving the department in good hands,” said Chief Latimore.

There are many facets to the responsibilities of law enforcement officers, and Grounsell is committed to ensuring that the City of Laurens is equipped and trained for all of them.

“Ultimately, it is not enough to simply make arrests and charge suspects,” said Grounsell.  “We must maintain a high standard in our procedures and investigations so that we are building strong cases that will lead to convictions and consequences.  We have to have positive working relationships with the Sheriff’s Department, SLED and the law enforcement agencies of surrounding communities.  We’re all in this together.”  Grounsell previously served as the lead investigator for the 13th Judicial Circuit Solicitor, conducting investigations and assisting with trial preparation for criminal prosecutions in Greenville and Pickens counties.

Grounsell has particularly extensive experience investigating and helping to prosecute the kinds of crime which are the most destructive to our community: gangs and drugs.  He previously served as an undercover vice and narcotics officer and investigator with the Greenville Police Department, Sheriff’s Department, and the US Drug Enforcement Administration.  “I just kind of got a natural high off tracking and chasing down drug dealers – not addicts, but actual dealers, the traffickers, the big players that are destroying families and who are very violent.”  His experiences inspired him to author his book, “A Narc’s Tale,” which was first published in 2011 and for which he received recognition from the SC Press Association.

“The reason I want to live in Laurens and serve the citizens of Laurens is because my family and I have fallen in love with the quality of life and community spirit of this city,” said Grounsell.  “I am eager to do my part to contribute to that quality of life and work with the dedicated officers and staff who serve the public in the City of Laurens Police Department.  We look forward to making Laurens home.”

Grounsell will assume leadership at the Police Department on August 1, 2022 as Acting Chief of Police, and will serve in that capacity until Chief Latimore officially resigns from her post upon confirmation by the United States Senate. 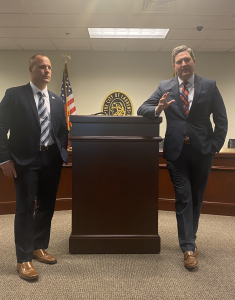 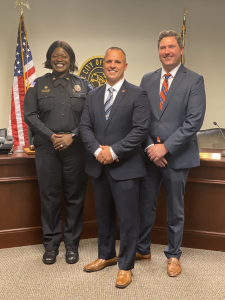 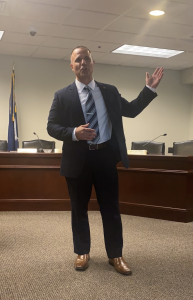 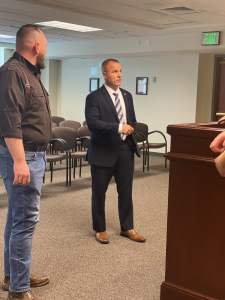 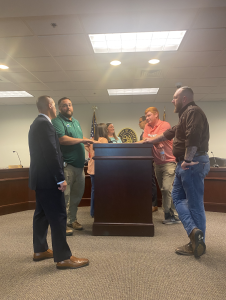