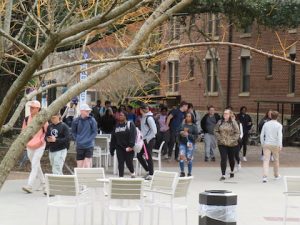 Lander University students returned to campus this week to begin a new semester. For a variety of reasons, they were glad to be back.

Like a number of her peers, Olivia Stone, a sophomore early childhood education major from Belton, said that the best part about returning to school was “seeing my friends.”

Ainsley McGinty, a senior business administration major from Columbia, said she enjoyed the time spent with her family over the holidays. At the same time, she said, “I missed going to class, as weird as that sounds.”

Mia Anderson, a sophomore nursing major from Florence, said that she, too, was looking forward to her classes, especially an honors class in pathophysiology.

“I’ve heard that it’s hard. But I’m interested in the subject, so I think it’ll be fun to learn,” she said.

Savannah Sims, a junior political science major from Charlotte, N.C., was happy to have avoided having to take an 8 a.m. class.

The best part of being back?

“Seeing my friends,” she said.

Rising at 6 a.m. so he can make it to an 8 a.m. class is no big deal for Ryan Thornton, a junior cybersecurity major from Anchorage, Alaska. He enjoys the early morning drive to school and has plenty of parking options, after he arrives.

To Thornton, the beginning of a new semester is a positive thing. It means “having something to work on, having sort of a purpose,” he said.

Trey China, a freshman computer science major from Sumter, said that the best thing about being back was “feeling like you’re a part of something bigger.”

Every new semester brings challenges, of one kind or another, and China said he still needed to “get a couple of things straightened out” with Lander’s Financial Aid Office.

The main issue for the Registrar’s Office was accommodating students wishing to change their schedules or majors, according to Carley Granate, coordinator for Student Services and Transcripts.

Lander Police Chief Greg Allen said that there had been “a lot of students to come in for ID’s and parking permits. But it’s been a good day so far.”

He said he was “looking forward to a great semester.”