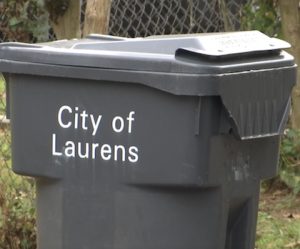 Laurens City Council voted on Thursday night to get back into the residential waste removal business beginning in March. By providing these services in-house, City Council’s action keeps monthly fees at their current level, well-below the rates of neighboring municipalities. In addition to ensuring a seamless transition of services when the City’s contract with Green for Life Environmental (GFL) ends in March, the City will also replace the aging facilities which house the Streets and Sanitation Department and provide a new “convenience center” intended to reduce instances of illegal dumping. Providing residential trash services in-house is expected to save the City approximately $132,000 each year.

“We have studied the details while keeping our eyes on the big picture,” said Mayor Nathan Senn. “We believe our residents deserve reliable, quality trash service, and we also understand that keeping rates low and making legal waste disposal more accessible means that we are less likely to have trouble with illegal dumping. With these planned changes, the only change residents may see is a change of their garbage collection day.”

Last night, City Council voted to approve a resolution authorizing a lease-purchase agreement and a bond ordinance providing for the issuance of a general obligation bond. This funding, repaid by the current garbage fee, will fund the purchase of new trash trucks and construction of an addition to the Recycling Center on Caroline Street which will serve as the new home for the City’s Streets and Sanitation Department.

In 2012, the City contracted with Waste Industries, now GFL, to provide its residential trash service. The contract between the City and Waste Industries will expire at the end of February 2023. This agreement included inflation adjustments that, over time, left the city paying GFL Environmental substantially more revenue than was collected through the City’s garbage fee. These inflation adjustments led to a shortfall totaling more than $132,000 each year.

Additionally, the contract required the city to conduct all billing and customer service, essentially acting as a middle- man between the customer and the contractor. In addition the fees due to GFL under the 2012 contract, the City has been required to pay for the printing and postage for monthly billing statements to each household receiving service, costing taxpayers more than $1,200 each month.

“We inherited this contract with GFL and addressing the inefficiency of that arrangement and the rising cost to taxpayers is a can that I was determined that we would not kick down the road again,” said Mayor Senn. “Likewise, I know that City Council has struggled to find a plan to replace the outdated and dilapidated facility used by our Streets and Sanitation Department. I was determined to address that long-overdue project, and I appreciate the cooperation of City Council in working with me to get both of these important projects done.”

“With new equipment, facilities, and the county’s residential solid waste policies, we will be able to provide residential trash at a lower rate than what would have been possible with private providers,” said Laurens City Administrator Eric Delgado. “I am proud to say that our trash rate will remain at the current rate of $11, which is one of the cheapest rates in South Carolina. We already have the accounts, expertise, and local staff needed to provide quality residential trash service. We can’t wait to start providing this service to our community,” said Delgado.

“I firmly believe, whatever the circumstances may have been in 2012, that the City’s contract with GFL is no longer in our best interests, and almost every member of City Council seems to agree that we needed to take action to move in a different direction,” said Mayor Senn, referring to the votes taken by Council at Thursday night’s meeting. Both the resolution and ordinance before council were approved by a vote of 6-1. Councilor Alicia Sullivan was the sole vote against both of these measures.

The City’s move to provide these services in-house came after extensive efforts to find a solution from the private sector. In September 2022, the City publicly posted a Request for Proposal (RFP) seeking a qualified firm to provide residential solid waste collection and disposal services. This RFP mirrored that which has been used in other communities. Ultimately, Carolina Waste Management was the only provider to submit a bid, but later rescinded this bid in late December 2022 citing the importance of integrity to the company, integrity which unfairly attacked by false allegations from certain individuals in the community following the City’s announcement that Carolina Waste Management was the sole bid received. “We certainly understand the vital need to safeguard a reputation for integrity – a priority which is shared by the City – and we wish Carolina Waste Management nothing but success in the future as they continue to serve the waste collection needs of Laurens County,” said Mayor Senn. Current Carolina Waste Management customers located within the city may continue to use this service even after the City’s plans to provide service go into effect.

Following the withdrawal of Carolina Waste Management’s bid, the City’s administration contacted other providers to learn why they did not bid on the previously released RFP to determine if any further steps could be taken to attract greater interest from the private sector to provide this service. Unfortunately, city leaders were informed that operational costs and landfill fees, which private contractors must pay, dissuaded their interest. In order to avoid these fees, GFL and other private waste contractors are forced to transport tons of trash each week to the Twin Chimneys landfill in Pelzer, SC, adding significantly to the cost of doing business in Laurens.

Facing a lack of service providers capable of serving the entire city, and the dramatic rate increase which might be expected from those private service providers, the City explored the option of resuming its own residential waste collection service. After looking at the necessary equipment purchases and facilities needs, the City’s administration presented a plan to City Council for approval.

“Having explored all the options, we believe that this will not only be a great option for the City of Laurens, but it will help address some nagging problems that affect every resident of the city,” said City Administrator Delgado. “We can provide a high value of service to each household without raising monthly fees or property taxes, we can maintain the city’s sound financial position, and we can solve some long-overdue problems. That is a significant achievement for our city.”

Residential trash pickup will transition from GFL Environmental to the City of Laurens beginning February 27, 2023. For cost-efficient, superior service, the City plans to run three trucks simultaneously and focus on concentrated area pickup rather than crisscrossing the entire city. Residential garbage will still be collected once a week, and pick-up days will range from Monday through Thursday. Door hangers will be going out this month to inform each household of the pickup day for their area. Apart from adjusting the day they roll out bins, no further action needs to be taken by Laurens residents to prepare for this transition.