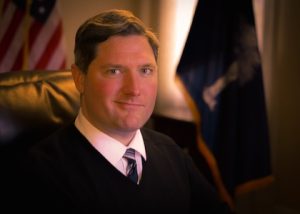 Laurens Mayor Nathan Senn has announced that he is seeking a second term.  To those who have seen the progress of the city in recent years, that comes as welcome news.

“I believe that Laurens residents can proudly say that our city is in better shape today than we were four years ago,” said Senn.  “But, though we have worked together to do so much, there is still much work to be done and Laurens needs steady, proven leadership to keep moving forward.”

Under Senn’s leadership, the local economy has continued to grow despite the setbacks of a global pandemic.  Outdated and cumbersome ordinances have been repealed.  Long-vacant buildings have been restored and a steady stream of new businesses across the city have opened, bringing new revenue to pay for city services.  As a result of the sound management of city finances, city facilities and technology are being upgraded, and employee pay and retention have improved.  Because of these improvements, the City has not raised property taxes during Senn’s term.

After Mayor Senn’s election in March 2019, thanks to immediate action taken to reintroduce the city to the Upstate business community, Laurens started growing again.  This began a reversal of a forty-year decline in population.  By the time of the 2020 Census, Laurens had grown in population 5% to 9,353 residents.  While this is still well short of historic population levels – meaning there is still room to grow – it is clear that the city is once again headed in the right direction.

For the first time in years, new neighborhoods are being built in our city.  In December 2022, Rootimentary, the steakhouse Laurens residents have requested for more than twenty years, opened to the public and is now attracting both locals and visitors.  More new businesses are under construction and redevelopments of Laurens’ historic mill sites are being planned in coordination with the City’s administration.  Partnerships personally fostered by Mayor Senn, like that of the City with Presbyterian College, have led to exciting new additions to Laurens, like the renovated Capitol Theatre which is set to open in 2023.

While the economy of Laurens has certainly prospered under Senn, there has been significant work to address the problems which affect safety and quality of life across the city.  City Council has passed ordinances to address the problems of vacant, derelict buildings and slum rental housing.  Millions of dollars in state funding have been requested for construction and repair of sidewalks.

Perhaps one of the most important actions taken by City Council and Mayor Senn is the recent creation of a redevelopment commission, whose members will serve on a voluntary basis.  The commission will be responsible for developing and implementing plans to eliminate blight and develop a strategy for city-wide neighborhood revitalization.  Senn is excited about the potential for this new commission.  “We have the opportunity to transform neighborhoods in a way that we’ve never seen, and the community conversations that will guide this commission are the best way to make sure our future is shaped by the desires of our neighbors.”

In addition to the city’s significant efforts to revitalize its economy and rebuild its neighborhoods, the leadership of the City’s government has seen significant change.  Senn is particularly proud of the appointments he has made.  “At my very first meeting with our departmental leaders, I let them know that my desire was that we continually seek a high level of professionalism in all that we do,” said Senn.  “I believe that the hiring decisions I have made reflect that commitment to professionalism.” In 2022, Senn hired new City Administrator Eric Delgado, Fire Chief Neil Roberts, and Police Chief Keith Grounsell.  With these and Mayor Senn’s other appointments, his focus has been on choosing candidates who are well-qualified and able to work in concert with other departmental leadership as part of the most effective team possible to serve the public.

“We’ve come a long way in just four short years, but we need steady, consistent leadership to keep moving forward,” said Senn. “We cannot turn back to the policies of the past, nor should we jeopardize the prospects of our future through a change in leadership.  If you give me the honor of continuing to serve as your Mayor for the next four years, I will work to maintain the progress we have seen while preserving the charm, character, and unique culture of this city we all love.”