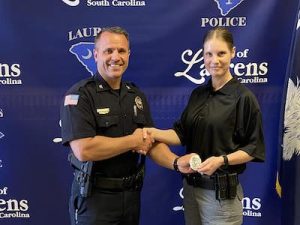 Officer Hall moved to South Carolina in August 2021 and began her career in Law Enforcement at the Greenville County Detention Center before joining the LPD in September.

After her training at the South Carolina Criminal Justice Academy is complete, Officer Hall will be assigned to the uniform patrol division.

Prior to her career in law enforcement, Hall worked as a jet engine mechanic in the Air Force while stationed at Shaw Air Force Base in Sumter, South Carolina. She also spent four years working in a special education and behavioral classroom while living in upstate New York.