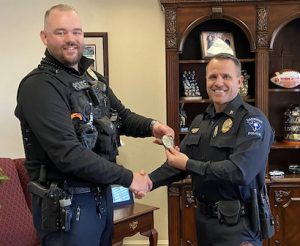 Laurens Police Department is excited to announce the newest member of the Laurens Police Department, Corporal Eric Center.
Cpl. Center was born and raised in Greenville County and is a 2010 graduate from Woodmont High School. His law enforcement career at the city of Mauldin where he served as a patrol officer before moving to a position with the Greenville Police Department. As an officer with the Greenville Police, Cpl. Center was assigned to Uniform patrol where he earned multiple commendations for the apprehension of burglary and auto breaking suspects, as well as suspects who were violent felons and were holding victims as hostage during a home invasion.
During his time on uniform patrol, he was selected as Officer of the month in January 2020 for the apprehension of a bank robbery and attempted murder suspect. Cpl. Center was also awarded a Distinguished Life Saving Medal for his role in successfully rendering aid to a victim that had sustained multiple gunshot wounds in November of 2021.
Cpl. Center comes to the Laurens Police department with more than 570 hours of law enforcement training and multiple certifications.
Posted in Laurens County BUZZ