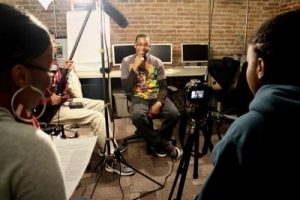 COLUMBIA, SC – The Nickelodeon Theatre, South Carolina’s only non-profit art house film theater and its Helen Hill Media Education Center, will host Come Around My Way: A Youth Media Project. A partnership between the Nickelodeon Theatre and CA Johnson High School, Come Around My Way is the culmination of eight CA Johnson students’ media education and film production work in the 2013-14 school year. Members of the media and the public are invited to attend a screening of the students’ work and a talkback following their films on Saturday, May 1, 2014 at 1 p.m. at the Nickelodeon Theatre at 1607 Main Street.

Come Around My Way is the first 36-week, school year media education initiative for the Helen Hill Media Education Center at the Nickelodeon Theatre. The program, created and spearheaded by Sherard Duvall, director of the Helen Hill Media Education Center at the Nick, aimed to help high school students develop stronger video production and media literacy skills, increase their levels of civic engagement, empower them to express themselves through the moving image and create self-produced documentaries that responsibly offer critical analysis of social issues that affect local neighborhoods. Classes were held after school at CA Johnson High School and Richland Library for two hours, twice each week.  The students learned and applied 21st century moving image literacy skills and video production techniques.

“The Nick is really proud of these students. They committed to the syllabus we laid out and worked hard to learn about new media literacy skills while producing their own films,” said Duvall. “Their talent is beyond their years, and their films aren’t to be missed. This program is an example of the Nick’s beliefs that media education is one important facet of our theater’s role in our community.