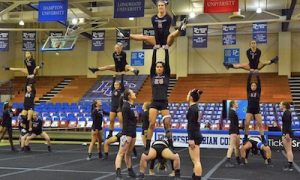 “I am excited about the win,” Presbyterian coach Amber Morrell said. “We started with lower start values than Saint Leo because we were wanting to do things that were really clean. We can build on that. I think we executed that so now as we go through the season we can increase our start values. The sport is really about cleanliness and execution so that is what we are trying to do is win by that strategy.”

UP NEXT
Presbyterian travels to Spartanburg, South Carolina to play Converse on Saturday, March 5 at 3 p.m.