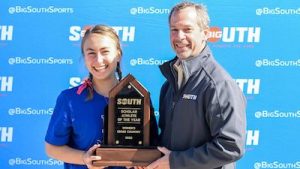 Senior Lili Jaraczewski was named the Big South Scholar-Athlete of the Year, as announced by the league office on Saturday following the Big South Championship hosted by Longwood.

Jaraczewski is now a three-time honoree on the league’s all-academic team after earning Saturday’s honor.

She is a biochemistry major with a 4.0 GPA. Jaraczewski is also a SAAC rep for the Blue Hose.

Jaraczewski opened the season with a 21:14.5 at the Eye Opener in Spartanburg as she finished in 36th in the event. She continued her 2022 campaign with a 22:16.6 at UNF. The Blue Hose season continued with the PC senior posting a season-best 20:45 at the Queen City Invite before rounding out the season with a 21:38 at the Royals Challenge. The Blue Hose senior posted her career-best in a 5k at the spring 2021 Big South Championship with a 19:30.6.

Both men’s and women’s cross country academic teams are listed below.