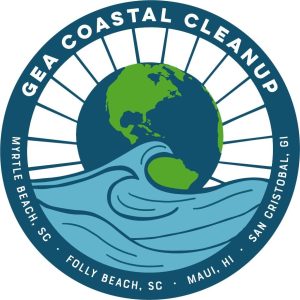 Two South Carolina beaches, one Hawaiian beach, one beach in the Galapagos to be cleared of debris next month

Global Eco Adventures (GEA), a Midlands-based nonprofit with offices in Columbia and Camden, has committed to cleaning stretches of coastline on two South Carolina beaches – including Myrtle Beach and Folly Beach – as well as a stretch of the Hawaiian island of Maui and a portion of the famed Galapagos Islands; on WORLD OCEAN DAY, June 8, 2022.

The planned coastal cleanups in the Palmetto State will begin at the Myrtle Beach SkyWheel where participants will meet before striking out along the Grand Strand’s boardwalk and beaches – picking-up trash and debris – from 10:00 a.m. until 11:30 a.m.

The GEA team will then travel two-and-a-half hours south to Folly Beach where they will meet near the landmark Tides Hotel before beginning a multi-directional clean-up along stretches of coastline on Folly Island, one of the barrier islands near Charleston. The participants will meet at the Tides at 3:00 p.m. Clean-ups will conclude at 5:00 p.m.

“We need to create a far greater awareness not only of the pristine beauty of these beaches, but of the critical importance of caring for and protecting them going forward,” says Thomas Mullikin, Jr. president of GEA. “These two beaches as well as the other two on Maui and the Galapagos were chosen for their particularly unique environmental importance and exceptional aesthetic value.”

“The four beach cleanups slated for World Ocean Day next month are but one of many vital environmental efforts GEA is actively leading,” says the elder Mullikin, who also directs the S.C. Floodwater Commission established by Governor Henry McMaster in 2018. “The work of GEA has really become something of my life’s calling, because I know what we do here and now will absolutely impact the lives of our children, grandchildren and generations to come.”

Mullikin adds: “Cheyenne’s and Thomas Jr.’s unrivaled energy and their passion for our natural world make them the perfect leaders for the GEA World Ocean Day project.”

Though the date has been approved, the specific times and locations for the Maui clean-ups on June 8 are still being discussed by GEA with local officials.

Clean-ups in San Cristobal, Galápagos are slated for the same day along the east coast of San Cristobal and slightly further inland within the community’s streets which lead to the local waterways. Times are also to be determined for the San Cristobal clean-ups.

“At all four beaches we want to engage local communities and encourage and inspire them to keep our waterways and oceans clean,” says Cunningham. “We want them to, in a figurative sense, take possession of what is naturally theirs and all of ours. Keeping our coasts and watersheds clean will keep us all clean and healthy.”

Cunningham adds: “No sign-up for participants is necessary at any of the four designated beaches. Water and items to aid in the clean-ups will be available at all locations. Remember to bring sunscreen, and maybe a hat to shade the sun.”

GEA is a world-renowned education and environmental-exploration non-profit which is best known for having conducted functional field research aimed at protecting shark populations worldwide as well as the protection of endangered species like the giant tortoises in the Galapagos. GEA has also examined first-hand the effects of an ever-changing climate, provided pro bono SCUBA-and-other training to countless marine enthusiasts on four continents, and it has led numerous exploratory expeditions around the world. In July, GEA will host its 3rd-annual South Carolina 7 (SC7) expedition from the mountains to the sea.

Observed annually on June 8, World Ocean Day (aka World Oceans Day) is an international day of environmental protection awareness which was first proposed by Canada’s International Centre for Ocean Development and the Ocean Institute of Canada in 1992. In 2008, World Ocean Day was recognized as an official day of global oceans conservation by the United Nations.