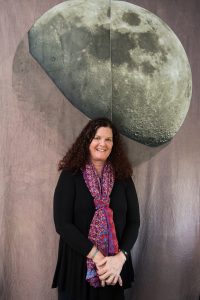 After a number of false starts, hiccups and weather delays, NASA’s Artemis 1 rocket finally left the ground early Wednesday, Nov. 16, 2022. The rocket’s historic liftoff is a much awaited moment for scientists and space enthusiasts looking forward to resuming manned space flights to the moon, more than 50 years since Apollo 17 last landed astronauts on the lunar surface.

College of Charleston geology professor Cassandra Runyon is among those thrilled to see the Artemis 1 take off. The launch is the first step of a multiyear plan by NASA to propel forward its human spaceflight program and lunar exploration. Long term, NASA hopes the Artemis program will lead to human exploration of Mars. As the director of NASA’s South Carolina Space Grant Consortium, which supports student engagement in STEM (science, technology, engineering and math) fields and NASA initiatives, Runyon says the new scientific discoveries and technologies that will come as a result of the Artemis program are endless.

Runyon recently reflected on NASA’s history of lunar landings, the significance of developing a new spaceflight program to the moon and how she hopes the excitement around NASA’s latest mission will inspire the next generation of astronauts, rocket scientists and planetary geologists.

What are the practical impacts of pursuing new missions of space and lunar exploration?

Exploration drives innovation. Take for example the computers used for Apollo – today’s cell phones have more computing power than the systems responsible for launching and returning the astronauts to Earth. Who knows what’s to come? That is the exciting part! Considering how the future lunar and Martian explorers will live and work in their respective environments is a multi-faceted challenge that requires imaginative minds. Understanding how to live and work in extreme environments off Earth can be translated directly back to working in and exploring extreme environments or settings here on Earth (e.g., undersea, mines, natural hazards and more).

How did earlier missions to the moon advance our technology?

We have learned so much preparing for both the unmanned and manned lunar missions. Some of the more common tech items we use today came out of developing systems and equipment to support lunar exploration, including the ion purification water filter, air purifier, computer mouse, long distance communication, scratch resistant lenses, smaller cameras such as the one in your cell phone and more. And, as we prepare to return to the moon and on to Mars the innovation continues.

Oh, so much! From a better, clearer understanding of the history of the formation of the Earth-moon system to navigation and communication on and around the moon. Returned lunar samples have shed light on the early magmatic or volcanic history of the moon, providing clues to early Earth processes and mineral and rock formation and distribution. For example, a new mineral called Armalcolite was identified from Tranquility Base (Apollo 11 landing site). This mineral is named after astronauts Neil Armstrong, Buzz Aldrin and Michael Collins. Once thought not to exist on Earth, it has since been found in several older igneous rocks in Montana, Ukraine and Greenland. This discovery illustrates the complex conditions that occurred on both the early moon and Earth.

Why do you think it’s important to have astronauts return to the moon?

Astronauts are critical to the process of planetary exploration. Working in tandem, humans and robots or robotic rovers can accomplish so much. Advances in automated systems such as driving will facilitate traversing from one location to another. And having a human presence associated with the exploration and experimentation process will facilitate infinite analyses and complex decisions.

How do you hope the Artemis missions shape the next generation of space explorers?

I am looking forward to a new generation of creative and imaginative minds who can advance U.S. science, technology and exploration even further. Looking at all the spin-offs from NASA and what was imagined, created, tested, developed and implemented to support the Apollo program, I know there are great things to come!