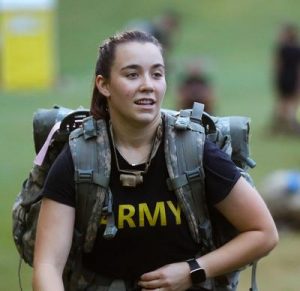 Furman University Army ROTC cadets wake at zero dark thirty for hour-long physical fitness drills three times a week. They take a three-hour, hands-on tactical lab once a week, march six to 12 miles with 35-pound packs twice a month, take a weekend field training exercise once a semester and attend a 35-day summer cadet training camp before senior year – all while completing the requirements for their academic majors.

On top of that grueling schedule, Krista Just ’22, of Pickens, South Carolina, has accomplished a first for women at Furman University. After graduation, she will become an active duty infantry officer in the United States Army.

It’s historic for Furman and rare throughout the country.

Ground combat roles were officially opened to women in 2013 with a change in Department of Defense policy, but it took until 2016 to fully integrate women into combat arms career fields, including infantry. The female infantry population comprises roughly 1% of total infantry officers – 104 females to 7117 males.

This year, Just, a biology major, will be among about 13 women to commission as infantry, which includes candidates from all Army ROTC programs and the United States Military Academy.

“I’m obviously very excited and apprehensive – it’s a great opportunity and it will take me really far. But I’m terrified,” Just said, laughing. “Infantry is an intimidating world to enter, especially as a woman. I’m scared about a few things, mostly the culture. It’s a man’s world, pretty much.

“There’s a lot of physicality that I’ll need to work on, and there’s lots of book knowledge and technical skills that go into this. But it is such an honor to bridge the gap for other women to do the same or just enter the military in any role. I like the idea of helping to eliminate the stigma surrounding women in combat arms or women in the military in general.”

Just also recently received a contract to serve in Army Space Operations, which she’ll take on in four years after her infantry stint and reaching the rank of captain. Based in Ft. Carson, Colorado, Just will work with global positioning systems, satellite data and missile identification in the space ops role.

Just is one of 18 seniors being commissioned through the Furman Army ROTC program. They will serve as second lieutenants in active duty Army, Army Reserves or the Army National Guard. Twelve of those commissionees are from Furman; the others hail from Bob Jones University and North Greenville University.

The Furman cohort, including Army branching and Furman majors, are:

In determining their Army assignments, cadets are evaluated on their academics, physical fitness standards, extracurricular activities and leadership performance over the course of three and a half years.

“This class has worked really hard to get to this point,” said Lieutenant Colonel Sarah M. Whitten, who came to Furman as professor of military science in 2021. “I’m lucky to be here and help get them over the last hurdle. I’m excited to see what they’ll do next.”