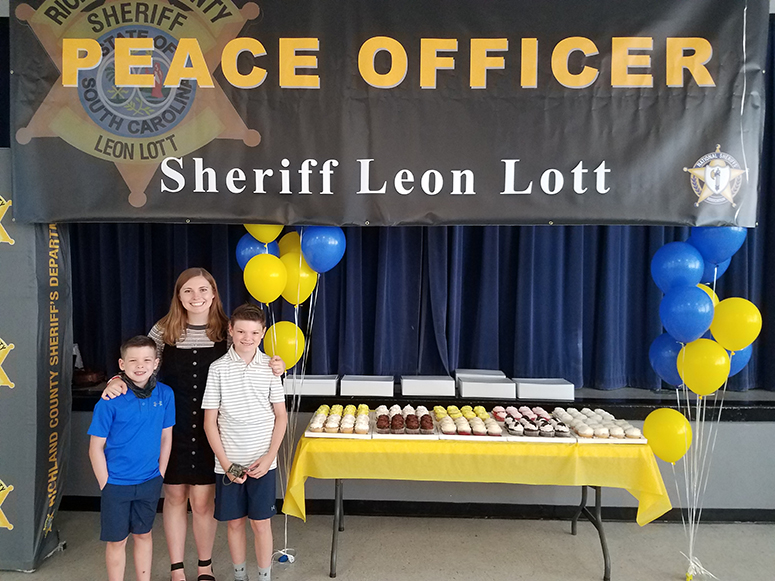 Pictured a few minutes prior to Sheriff Lott’s arrival are the Sheriff’s youngest daughter McKenzie Lott, 17, and her nephews (the Sheriff’s grandsons) Colson Cooper, 7, and Lawson Cooper, 10.

The pre-meeting surprise party was held at RCSD’s Denny Terrace training facility – former Denny Terrace Elementary School – and attended by family, a few friends, and approximately 150 RCSD deputies all celebrating Lott’s having been named national sheriff of the year by the National Sheriff’s Association (NSA), an honor for which he will be formally recognized during the NSA’s annual convention this summer. Lott learned about the award late last month.

“This award is not about me,” said Lott moments after the big surprise. “I am extremely grateful, but so should all of you be, because this award is for you – as a result of your great work – and the tremendous relationships we have with the communities we serve here in Richland County. So it is for all of our citizens too.”

Lott also thanked POLICE2PEACE, the national law-enforcement support organization which submitted Lott’s nomination to the NSA in 2020. POLICE2PEACE, working with a research team from New York University, conducted a study on the benefits of RCSD’s successful “peace officer” vehicle and uniform branding initiative which began in 2018.