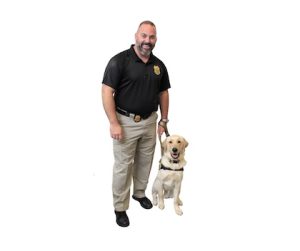 The South Carolina Department of Probation, Parole and Pardon Services (SCDPPPS) has become the nation’s first State Probation and Parole agency to acquire an Electronics Detection Canine. K-9 Chip, a 1 ½ year old Golden Retriever-Labrador mix, will assist Probation and Parole Agents to search for hidden electronics, which could potentially contain pornography, in the homes of sex offenders under active SCDPPPS supervision.

Electronics Detection Canines like K-9 Chip are specially trained to detect the presence of electronic media storage or other digital evidence, such as hard drives, USB drives, and cell phones. K-9 Chip has completed more than five months of training in Indianapolis at the Jordan K9 Detection facility.

Partain has served in the United States Marine Corps, earned the Navy and Marine Corps Achievement Medal, Good Conduct Award, and the Meritorious Unit Citation. Partain also earned the Top Dog Award while serving as a military canine handler, and he has served as a handler for the Anderson Police Department.

The costs of procuring K-9 Chip, the training, various equipment, leashes, collars, food storage bin and more was generously donated by a grant from Spectrum and the Defenders For Children, a recent recipient of the Secretary of State Angel Award.

“Defenders For Children was able to purchase and train its seventh Electronics Detection K-9 with the help and continuous support of numerous companies and individuals, including The Order of the Eastern Star of South Carolina Grand Chapter. Due to their generous donation, they received the K-9 naming rights,” said Toni Clark, CEO of Defenders For Children. Clark continued, “the Electronics Detection K-9 is a necessary and powerful tool to help stop criminals from hurting innocent victims.”  Six of the nonprofit organization’s previously donated K-9s are utilized by multiple County Sheriff’s Departments and the Internet Crimes Against Children (ICAC) Task Force Program throughout South Carolina and Georgia.

Governor Henry McMaster spoke about the potential for K-9 “Chip” to help Probation and Parole Agents fight against the horrible crimes committed against women and children. In addition, SCDPPPS Director Jerry Adger stated, “Flash drives can be as small as a penny and can be difficult for humans to find. These electronic devices can hold a surplus of evidence of child exploitation used by sex offenders. K-9 Chip will allow our Agents to expand their capabilities to address the growing number of cases involving digital media.”

SCDPPPS supervises 22,454 offenders living in the community throughout South Carolina. As of October 28, 2022, there are 682 active offenders under SCDPPPS sex offender supervision. The Department is charged with the supervision of offenders placed on probation by the Court, granted parole by the Board of Paroles and Pardons, or statutorily released to one of the Agency’s supervision programs.