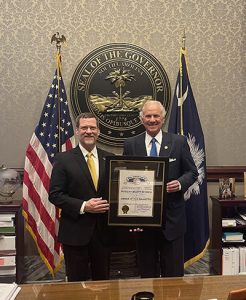 The Order of the Palmetto is South Carolina’s highest civilian honor and is presented in recognition of a lifetime of extraordinary achievement, service, and contributions to the state.

Woods has served as president and CEO of South Carolina Federal since 2004. Under his leadership, the credit union has grown by $1.5 billion in assets, expanded into four new markets, and earned numerous Best Place to Work and Best Credit Union awards from national, local, and industry media. Woods was a fundamental part of creating and launching the South Carolina Federal Foundation, which has donated more than $1.6 million to nonprofit organizations across the state since its founding in 2013.

Glassdoor, one of the world’s largest job and recruiting websites, named Woods a Top CEO in 2019 and 2021, and SC Biz News named him a 2021 Power Player, recognizing him as a leader in banking who is shaping the future of South Carolina’s financial services industry.

“A proud South Carolinian, Scott Woods has continuously put South Carolina and the Lowcountry first,” said Governor Henry McMaster. “Through his long list of charitable and volunteer work, Mr. Woods exemplifies what it means to be an Order of the Palmetto Recipient, making it a privilege to recognize him for his contributions to South Carolina.”

After graduating high school, Woods became a firefighter with the Mount Pleasant Fire Department. He returned to school after several years as a firefighter, earning his Bachelor of Science in accounting and finance from the College of Charleston, his MBA in finance from Auburn University, and his Certified Public Accountant certificate.

In addition to his professional leadership roles, Woods has served as chairman of the board of directors for the Charleston Metro Chamber of Commerce, Charleston Southern University, and the Lowcountry SC Chapter of the American Red Cross. He is an active member of his church, where he has served as deacon, trustee, and board member, and a passionate supporter of Susan G. Komen, Water Mission, and One80 Place.

A native South Carolinian, Woods was born and raised on Folly Beach and currently lives on James Island with his wife and daughters.

Connect with South Carolina Federal Credit Union for products, services, and financial literacy. More than 175,000 members and $2.5 billion in assets, the member-owned cooperative operates 27 offices and serves six major markets including Charleston, Columbia, Georgetown, Greenville, Florence, and Spartanburg. Over 55,000 surcharge-free ATMs are available worldwide through the Allpoint Network. More information about South Carolina Federal can be found at scfederal.org.