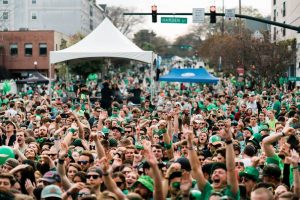 “For more than four decades, St. Pat’s in Five Points has been a pinnacle in our community,” says Heather McDonald, executive director of the Five Points Association. “We work hard throughout the year to make sure the music lineup is eclectic and something everyone can enjoy — from indie rock and alternative, to country and Americana, there’s something for everyone at St. Pat’s.”

“We’re excited for the amazing line up of bands that will grace our four festival stages,” says Steve Cook, president of the Five Points Association Board. “Villa*Nova is for the nostalgia-seekers who come back year after year — while Nate Smith will draw the country-music lovers out to enjoy the festival.”

Many past performers at St. Pat’s are known for getting their big break at the festival. Last year’s festival was co-headlined by Grammy-winning artists, Blues Traveler, and TikTok sensations, Surfaces. A few notable artists from previous festivals, include Blake Shelton, Walker Hayes, Hootie & the Blowfish, Morgan Wallen, Judah & The Lion, Atlas Road Crew, Rodney Atkins, St. Paul and The Broken Bones, Dashboard Confessional and many more!

In addition to the four stages of music, the events the community has come to know and love will return on March 18, including:

General admission tickets to the festival can be purchased online at StPatsColumbia.com for $25 in advance until March 17 or $30 at the gate. The Ultra-Premium VIP Suite will be held at Saluda’s, located at 751 Saluda Avenue. Additionally, the Lucky Leprechaun VIP area will be located near the Postcard Mural in Five Points. Limited quantity VIP Suite tickets for $200/each and VIP area tickets for $100/each are available for purchase at StPatsColumbia.com.

Each year, St. Pat’s in Five Points welcomes approximately 30,000 attendees, ranging from children,
families, college students and senior citizens. The festival brings in $7+ million to the City of Columbia
and Richland County. Last year, more than 35% of St. Pat’s attendees traveled from outside of Columbia, spanning more than 2,000 zip codes and 30+ countries.

About St. Pat’s in Five Points
Over 40 years ago, Duncan MacRae of Yesterday’s Restaurant & Tavern, Steve Gibson of Peddler Steak
House, Chuck Pettit of the Columbia Jaycees and Tony Latella of PYA Monarch sat down in a booth at Yesterday’s Restaurant & Tavern, had a few beers and devised a plan to increase the visibility of Five Points’ businesses on St. Patrick’s Day when most people were leaving town for Savannah, Ga. The annual St. Pat’s in Five Points emerged forming a family fun-filled festival benefiting children’s charities in
the Midlands. Visit StPatsColumbia.com to learn more.