In the late 1990s, a time that seems ancient, I touched the emperor’s hem. That is I corresponded with a writer whose words revealed a style original and mesmerizing. Somehow, I hoped, might his gift rub onto me? I first read him in Esquire before modern, less genteel ways soiled it. That was in June 1986. His story, “The Captain’s Wife, told how he fell in love with a friend’s wife but did not pursue her. The story’s subtitle told you all you needed to know, “Once Upon A Time There Was Honor In Love.”

His style of writing and his life view made you want to read more. And so I found his book, Burning The Days, Recollection in 1997. I had lost my way in the Sea of Life, and his book became my compass. I took his book wherever I traveled. I read it in hotels, at my parents’ home, wherever I ended up. I bought other books of his, and the idea came to me I should get him to sign them. But how?

I contacted a writers’ organization in New York. “Ship the books to us and we’ll send them to him and he can sign them for you.” Some money was involved. I waited and waited. Then day-of-days my books came directly to me from Salter. Now I had his address. I wrote him a thank you letter, not expecting a reply, but he wrote me back speaking of the difficulty of getting published. He wrote some more.

Later he sent me a beautiful card, “Blue Nude III,” a 1952 cut and pasted paper print by Henri Matisse. On its back he told me he had just come back from Chamonix, France, where he had been shooting a documentary, largely based on his novel, Solo Faces, for German TV. “Oddly enough,” he wrote, “my biggest sales are in Germany.” He mentioned two new books coming out and something called the Internet. “I’ve never looked myself up on the Internet, must be frightening.” He closed his note, saying, “Am very grateful to you—embarrassing to talk about myself. Sincerely, James Salter.” 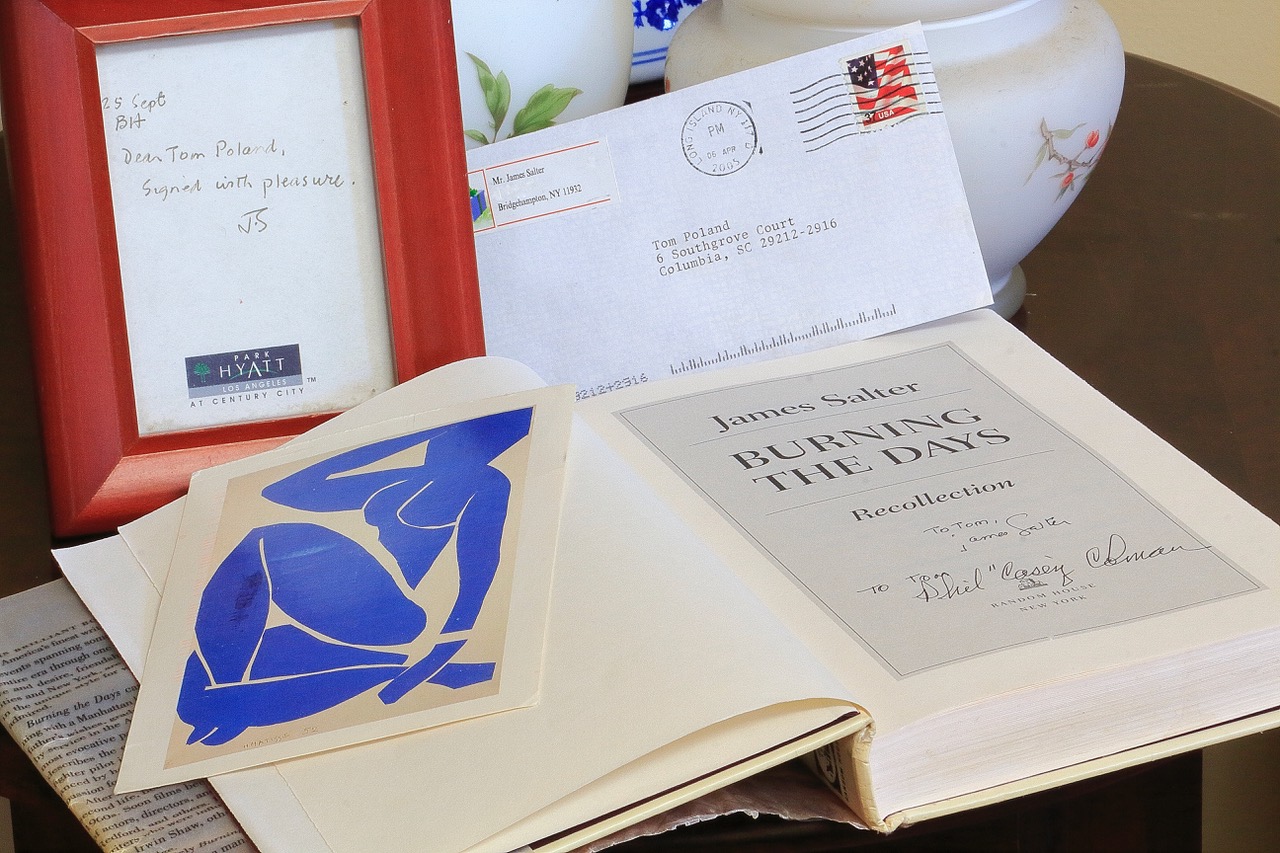 In Burning The Days you’ll read about Hemingway, Balzac, Roman Polanski, Irwin Shaw, Leonard Bernstein, and Robert Redford. No name appears more than Phil “Casey” Colman’s, a Georgian, a fighter pilot in Korea alongside Salter. I crossed paths with Colman at a family reunion in Lincoln County, Georgia. Many pilots attended the reunion, Colman among them. He lived in Augusta. I had my book with me, of course, and showed him he was in it. He had no idea Salter had become a writer of high merit.

In his book Salter wrote much about Phil “Casey” Colman, who was an ace. Here’s a bit. “It was May when Colman flew what no one except him knew would be his last mission. Colman left that day. He was lighthearted and self-promoting. Day-to-day truth was probably not in him but a higher kind of integrity was, a kind not wasted on trivial matters. He had an infectious spirit. We were unalike. I adored him.”

I handed my book to Colman. “Look how many times you are in this book.”

For an hour or more he read the book. By now he was old and frail, but I knew exactly who and where he was at the moment. He was back in Korea and his youth had returned as he held an F-100 high above the Yalu River. In Salter’s words, “He and a MIG roared across mud flats wide open, needles crossed, the MIG like a beast of legend fleeing ahead. The controls were unyielding. The ground rushed beneath him. Destiny itself, unrehearsed, shimmered before his eyes.”

Writers, well this one at least, worship the divine works of writers whose talent takes them to rarified heights. I admire these: James Dickey, Harry Crews, and James Salter. Salter’s alone at the top.