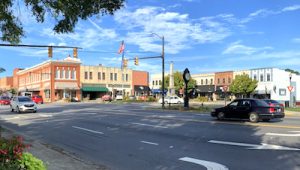 One of the greatest things about a thriving downtown is that it can rarely be defined by a single building or business. In many cases, a small historic downtown will have that one place that somehow came to be painted bright green with a big, bright, yellow “Auto Money” sign on the front – these buildings become a talking point for a few months and eventually everyone either gets used to looking at it, or they simply look the other way.

The core of the City of Clinton’s downtown architecture displays characteristics of the period dating from 1875 to the 1930s. This includes large glass storefronts and intricate brickwork. It is evident that many of these buildings and facades were likely renovated and rehabilitated in the 1960s & 1970s as Clinton transitioned from “Town” to “City” and the population boomed. This can be seen in the more “modern” brick styles and thin, aluminum-framed window casings. In 1984 the City determined that it had a treasure worth recognizing, and it established the Clinton Commercial Historic District which is recognized on the National Register of Historic Places.

I like to think that woven within this architecture is something deeper. When you start talking to people who have been around Clinton for a little while you start to hear a repeated pattern of names. This fact resonates as, over time, you notice building names, street signs, businesses, and places; M.S. Bailey Municipal Center, Copeland Street, Cooper Motor Company, Martha Dendy School – to name a few. You can take time to read the marker along Broad Street and learn of Henry Clinton Young, who first planned out the streets that make up this place where we live. Eventually you recognize that these names are familiar because you know these people, their descendants, and their stories.

In a physical way, cities reflect their past. The buildings we see in the historic district today are representative of those periods where Clinton’s pride could only be measured in a decade’s worth of wins on the football field. The surrounding neighborhoods have roots in the most successful years of a vibrant textile industry. The railroad tracks speak to the mode of transportation that once carried many PC freshmen to their first days on campus.

In February 2010 City Council approved a “Design Review Board” for the “Clinton Historic Preservation District.” The following is an excerpt from that ordinance;

By establishing the Clinton Design Review Board and charging it with the responsibility to protect the architectural integrity of historic structures and the character of the City of Clinton, the city intends:

The Design Review Board is a piece of a larger integrated process and set of standards integrated with Planning Commission, Board of Zoning Appeals, Staff, and Council, which is detailed in the text of our Zoning codes and ordinances. Each of these elements has tasks aligned with the words above. The purpose is to ensure that changes to the downtown district go through a thorough process of consideration for conformance with adjacent buildings, a level of quality that reflects pride, and, most importantly, an alignment with a larger vision. This historic district is representative of those who came before us, and the value that the City places on itself (past and current) is reflected in how we administer the processes in place.

We are in an era of revitalization in Clinton which we have been waiting on for some time. With each new building permit, particularly those in the historic district, we have an opportunity to enhance the “Clinton experience” and honor our history, or undermine the core components of what makes the City unique to any other place in the country. The foundation of Clinton lives not only in the past but should be a serious consideration during the present, as it can lead us into a brighter future. If a project were to move forward outside of the process it would limit the representative voice of the public, and ultimately may whittle away at our history.

I am very hopeful for the future of Clinton and I look forward to seeing the City as vibrant as it was in decades past. With deliberate effort, a unified vision, and leadership – I fully expect this to happen.

As a closing thought, I look back at the first line of the Design Review charge and consider how “to safeguard the heritage of the city” can just as easily be stated as “honor the people, families, and businesses who built this city.” 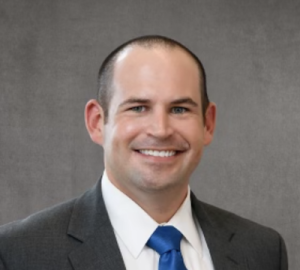 Joseph Dyches is the owner of Canebrake Engineering and Surveying located on West Main Street. He and his wife Laurie, a Clinton native, are excited to be a part of the re-energizing of the historic downtown. At least once a week they can be found with their three children enjoying an ice cream cone at Laila’s Place at the corner of W Main and Wall Street.