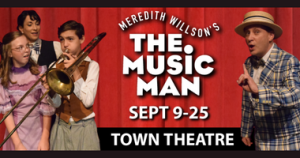 When a con man tries to swindle an entire town out of their money to start a boys’ band, it leads to an old-fashioned love story. It’s Meredith Willson’s The Music Man, the story of a fast-talking salesman, the local librarian, and the good folks of River City, that has continued to entertain audiences since 1957. The entire community falls victim to Harold Hill’s scheme – everyone, that is, but Mayor Shinn and the town librarian, Marian. While Harold casts his spell over the unsuspecting Iowans, Marian and Mayor Shinn resolve to reveal the true Harold Hill. Yet, Harold’s belief in the unbelievable comes to his rescue as he finds love and, even though he doesn’t know a trombone from a treble clef, music!

The Music Man is under the direction of Allison McNeely with musical direction by Michael Simmons and choreography by Shannon Scruggs. Costumes are by Janet Kile with Corey Langley serving as technical director. The show is sponsored by Carolina Children’s Dentistry and Church Mutual Insurance.