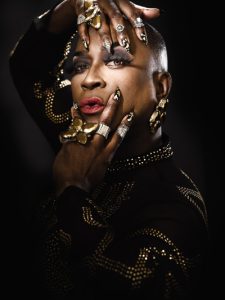 Let’s do the Time Warp again. The Rocky Horror Show returns to the Thigpen Main Stage just in time for Halloween. Running September 30th through October 29th, this spooky, sensual fan-favorite is directed and choreographed by Trustus Company member Terrance Henderson and musically directed by Company Emeritus Chris Cockrell with company member Walter Graham returning to the role of Frank’N’Furter. Rocky Horror marks the seventh time the show has been produced by Trustus, 30 years after the original production. The show is sponsored by Top Hat Sweepers, Z Realty, and Marketing Performance.

Stuck with a flat tire during a storm, newly engaged love birds Brad and Janet find themselves at the eerie mansion of Dr. Frank’N’Furter. What follows is a “strange journey” full of wild characters, huge musical numbers, and fan-favorite moments that are sure to please. This out-of-this-world classic will leave audiences dancing, laughing, and shivering with antici…pation. The Rocky Horror Show inspired the 1974 film of the same name. With book, music and lyrics by Richard O’Brien, The Rocky Horror Show is an interactive rock musical. Audiences are encouraged to dress in costume and yell “callouts” back at the cast throughout the show. Trustus will also be selling participation kits that include playing cards, newspapers, toilet paper, and more. The audience is welcome to use their props during specific moments in the show, making it a communal experience for cast and patrons alike. (Trustus does not allow outside props into the theatre.)

Company Member and Trustus’ Equity Advisor Terrance Henderson is excited to direct: “My intention was to look at this very classic rock horror musical through an unapologetically Black and queer lens. To explore what this world looks like from my own perspective. I want to fully embrace our choice to cast a Black actor in the role of Frank ‘N’ Furter and fully investigate what the vibe then feels and looks like from that point of view.” Some influences include Grace Jones, Kevin Aviance, and the Egyptian pharaoh Akhenaten. “I hope this production cultivates joy,” says Henderson. “I hope it feels enticing and inviting and exciting, and I hope it makes room for everyone and includes them in our journey.”

Trustus Company member Walter Graham asked Artistic Director Dewey Scott-Wiley for one more chance to play the character before having to “retire the high-heeled pumps” and is happy to be doing so with frequent collaborator Henderson. “Terrance Henderson is one of the most talented, hardworking artists in the United States,” he says. We have that friendship where he can tell me if I am going the wrong way and I won’t get offended. I trust Terrence Henderson because he is my brother.”

Graham has been intrigued by Frank since he first saw The Rocky Horror Picture Show while he was a student at the University of South Carolina. “Frank is a character who shows people who he is without any fear,” he says. “ He goes after what he wants and does it in his own way.  Playing Frank on stage is so much fun because he is what I want to strive to be as a human – free to be yourself at all times.”

“Maybe when we leave we may even take a bit of Frank’s audacity and bravery with us,” says Henderson. “Live more truthfully, boldly, embracing our complexities. Celebrating ourselves and having a damn good time in the process. Looking good and feeling gorgeous.”

Trustus is proud to partner with Twisted Spur Brewing for a dinner package that includes a three course dinner and a ticket to Rocky Horror. On select nights in October, enjoy a fixed menu with lots of delicious options before your performance of Rocky Horror. The package is $95 per person, or $180 per couple and includes dishes like Oysters Rockefeller, shrimp and grits, and tiramisu. Tickets can be booked through the Trustus website. Questions can be directed to Twisted Spur at (803) 764-0203.

Trustus will also host a closing night Halloween party. Partake in spooky snacks catered by Twisted Spur, free drinks, door prizes, and a costume contest before the show, then enjoy the closing night performance of The Rocky Horror Show with your participation bag included. Costumes are highly encouraged and guests are invited to continue the party after the show. More info to come. Tickets are very limited and can be purchased through the Trustus website.

The Rocky Horror Show opens Friday, September 30th at 8:00pm and runs through Saturday, October 29th. All Trustus matinees will now be held at 2:00pm. The box office and bar open one hour prior to show time. The Rocky Horror Show contains material not suitable for all ages, including sexually explicit language and movement, and gore and may not be suitable for patrons under the age of 16. Viewer discretion is advised. The Rocky Horror Show also includes use of theatrical haze and flashing lights during multiple scenes. If you have any questions, please contact the Box Office. Reservations can be made online at trustus.org or by calling the Box Office at (803) 254-9732.