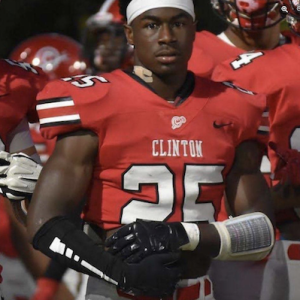 The Laurens County Touchdown Club is proud to announce that for games played on September 29th, the Player of the week is senior running back, linebacker, and special team player Bryson James of Clinton High School.

James is a running back, linebacker, special teams player, and captain for the Clinton High School Red Devils as they defeated Union County High School by a score of 61 – 7 Friday night.

James, a Clinton High senior, had five carries for 70 yards and two touchdowns rushing for CHS. James had TD runs of 32 yards and 5 yards for the Red Devils.  He averaged 14.0 yards per carry for the game.  James also had a 90-yard kick-off return to open the second half of the game that makes his 3rd kick-off return on the season. On defense, James has 3.5 tackles and 2 tackles for lost.

On special teams, James had one blocked punt and one caused fumble on a punt as well, all that led to two touchdowns for the Red Devils as he constantly wrecked the Yellow Jackets on punts and kicks.

Head Coach Corey Fountain stated, “Bryson gets after it in all phases of the game. He is a positive vocal leader as well as showing others the way through his work ethic and effort!”

The October 6th meeting will feature highly popular Chris Burgin of the South Carolina SportsTalk program to give us an overview of high school and college happenings in SC.

The Laurens County Touchdown Club meets every other Thursday throughout the football season at The Ridge located in Laurens at 301 Exchange Road and the public is invited. Tickets can be purchased at the door for $15. All meetings are at Noon.